Stories and News no. 2: Traumatized children 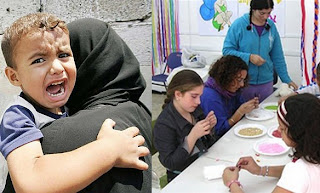 The Story
Once upon a time an organization, Jewish Agency for Israel, created a Fund for children and youth.
“We once again stand at a seminal moment, a moment where we have the capacity to transform tragedy into opportunity”, this was one of their principles.
As they moved forward, they needed to recognize that close to one-third of Israel’s population was traumatized - forced to either move life underground or to seek temporary shelter elsewhere. As life returns to ‘normal’, hundreds of thousands of youngsters have had to transition from shell shock back to school. Without immediate and ongoing support, it’s hard to imagine how they would have successfully reintegrated into a normative school year framework.


The News
Reuters - Sun Feb 8, 2009 (By Nidal al-Mughrabi)
JABALYA CAMP, Gaza Strip - Five-year-old Mohammed al-Najjar lets his mind wander as he puts crayon to paper in an effort to depict an Israeli air strike inside a refugee camp in the Gaza Strip.
"This is the plane and those are two missiles it fired. They hit a house and the house was damaged but was fine. The fridge caught fire," he says in matter-of-fact detail, sitting at a table with other children in Gaza's Jabalya camp.
He draws a girl who has survived the attack and places her outside the house, but there is also a boy.
"Khaled was killed," he says.
The scene, which Mohammed drew at the urging of his teacher and a mental health counselor who visited his classroom, is imaginary. His home in Jabalya was not damaged, but others nearby were.
Health workers say many children, including those who did not lose family members or their homes, are suffering post-war trauma.
Around 1,300 Palestinians were killed in the Israeli operation, including more than 300 children, Palestinian medical officials said.