Stories and News no. 3: Obama and Berlusconi on the phone 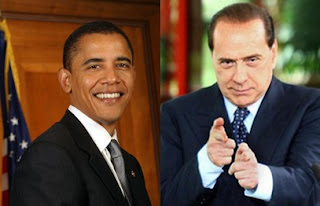 The Story:
Once upon a time there were two powerful men.
One elected by people who voted for him and the other thanks to those who did not go to vote.
One became president thanks to Internet too.
The other will be defeated thanks to the Web.
One was the first African American to become U.S. president.
The other, when he read the news, called him “suntanned”...
One day they had a phone call:
"Hello, Obama? It’s me, Berlusconi... "
"Ah ... you ..."
"Well... Sorry for my words... I often open mouth and say bullshits..."
"Okay, excuses are accepted."
"I just wanted to be humorous..."
"I understand, but if after your election, someone had commented saying that you're a cap, with a ridicule wig and that you have a tense like a drum skin, what would you said?"

The News:
ROME (Reuters) - The U.S. President, Obama and the Italian president Silvio Berlusconi will speak today on a phone call about the next G8, G20 and the economic crisis (By a diplomatic source).
Today, “Il Sole 24 ore” Newspaper writes about a call at 3:45 p.m. (9:45 a.m. in Washington).