Stories and News no. 4: African continent is an opportunity?! 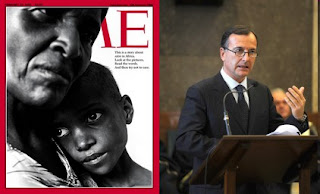 The Story:
Once upon a time there was a continent called Africa, which, until the first half of the nineteenth century was an unknown and mysterious land.
The colonization of the continent was limited to coastal areas and deltas of large rivers. Starting from these areas, the colonialist nations had established a dense network of commercial settlements, in competition with each other for the exploitation of raw materials and the slave trade. The African land began to change thanks to the explorers that through geographical societies sent information concerning the inexhaustible resources contained in these virgin territories.
In that time the colonization of the great African continent began.
A unique opportunity for many countries but is not been and never will be for African people...

The News:
(Ansa.it) - ROME, FEB 12 – “Italy made a lot of job in Africa, a continent that is an opportunity and not a problem”, Italian Foreign Minister Frattini said.
The head of the Ministry points out that the government has decided to devote a session to Africa in occasion of the G8 summit in July. This is Frattini’s replication to the First Lady of France, Carla Bruni, who said she was sorry for the delay in the payment of the Italian quota for the Global Fund to Fight AIDS.

Yes, you read that right: Italian Minister of Foreign Affairs says that Africa is an opportunity...