Stories and News No. 9: Obama the socialist? 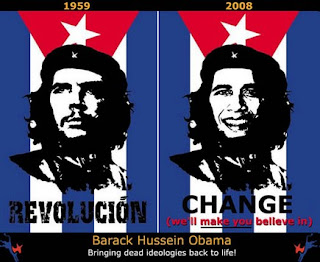 "Mr. President, Distinguished delegates:
Of all the burning problems to be dealt with by this Assembly, one of special significance for us, and one whose solution we feel must be found first — so as to leave no doubt in the minds of anyone — is that of peaceful coexistence among states with different economic and social systems. Much progress has been made in the world in this field. But imperialism, particularly U.S. imperialism, has attempted to make the world believe that peaceful coexistence is the exclusive right of the earth's great powers. That peaceful coexistence cannot be limited to the powerful countries if we want to ensure world peace. Peaceful coexistence must be exercised among all states, regardless of size, regardless of the previous historical relations that linked them, and regardless of the problems that may arise among some of them at a given moment. At present, the type of peaceful coexistence to which we aspire is often violated.
We must also state that it is not only in relations among sovereign states that the concept of peaceful coexistence needs to be precisely defined.
We have maintained that peaceful coexistence among nations does not encompass coexistence between the exploiters and the exploited, between the oppressors and the oppressed.
Furthermore, the right to full independence from all forms of (colonial) oppression is a fundamental principle of this organization.
So, we ask withdrawal from the Guantánamo naval base and return of our territory occupied by the United States.
Forty-seven countries meeting at the Second Conference of Heads of State or Government of Non aligned Countries in Cairo unanimously agreed: "Noting with concern that foreign military bases are in practice a means of bringing pressure on nations and retarding their emancipation and development, based on their own ideological, political, economic and cultural ideas, the conference declares its unreserved support to the countries that are seeking to secure the elimination of foreign bases from their territory and calls upon all states maintaining troops and bases in other countries to remove them immediately. The conference considers that the maintenance at Guantánamo (Cuba) of a military base of the United States of America, in defiance of the will of the government and people of Cuba and in defiance of the provisions embodied in the declaration of the Belgrade conference, constitutes a violation of Cuba's sovereignty and territorial integrity.
Noting that the Cuban Government expresses its readiness to settle its dispute over the base at Guantánamo with the United States of America on an equal footing, the conference urges the U.S. Government to open negotiations with the Cuban Government to evacuate their base."
The government of the United States has not responded to this request of the Cairo conference and is attempting to maintain indefinitely by force its occupation of a piece of our territory, from which it carries out acts of aggression such as those detailed earlier.
Those who kill their own children and discriminate daily against them because of the color of their skin; those who let the murderers of blacks remain free, protecting them, and furthermore punishing the black population because they demand their legitimate rights as free men — how can those who do this consider themselves guardians of freedom?"

"My fellow citizens:
To the people of poor nations, we pledge to work alongside you to make your farms flourish and let clean waters flow; to nourish starved bodies and feed hungry minds. And to those nations like ours that enjoy relative plenty, we say we can no longer afford indifference to the suffering outside our borders; nor can we consume the world's resources without regard to effect. For the world has changed, and we must change with it.
What is required of us now is a new era of responsibility - a recognition, on the part of every American, that we have duties to ourselves, our nation, and the world, duties that we do not grudgingly accept but rather seize gladly, firm in the knowledge that there is nothing so satisfying to the spirit, so defining of our character, than giving our all to a difficult task.
This is the source of our confidence - the knowledge that God calls on us to shape an uncertain destiny.
This is the meaning of our liberty and our creed - why men and women and children of every race and every faith can join in celebration across this magnificent mall, and why a man whose father less than 60 years ago might not have been served at a local restaurant can now stand before you to take a most sacred oath."

Reuters, February 2009: Obama said on Thursday the budget is a "first step" toward creating or saving millions of jobs and laying the foundations for growth, amid the worst economic recession in decades.
The spending plan also seeks to enact a bold agenda to upgrade schools, expand healthcare coverage next year, while cutting taxes paid by Americans on lower and middle incomes.
TAKING FROM THE RICH: The budget was attacked by Republicans in the U.S. Congress unhappy about its unprecedented spending increases, and its shift toward raising taxes on wealthier Americans in a bid to narrow the gaping deficit.
Wealthier professionals earning more than $250,000 dollars will have to pay higher taxes under the plan.

Reuters, February 2009: Obama's budget suggests that spending up front to get coverage for more of America's 46 million uninsured people will save cash if patients get preventive care and avoid expensive and chronic diseases. The budget also suggests that the Obama administration plans to negotiate with drug makers to lower drug prices, as the European Union and Canada now do. The Obama administration on Thursday vowed to end years of cost overruns and schedule delays in U.S. weapons programs, calling acquisition reform one of the Pentagon's highest priorities.

Reuters, January 2009: Obama ordered the closure of the detention complex, which houses about 250 terrorism suspects and others in a camp and maximum-security facilities at the Guantánamo U.S. naval base. Inmates have been held as long as seven years without charges. Accusations that prisoners have been abused to the point of torture have spurred wide condemnation of the United States.