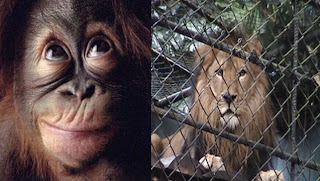 All started at the beginning of 1994.
An odd news arrived from Sweden: an innocuous chimpanzee named Santino pulls stones to visitors, bothered by their presence.
That was Funny.
The fact that the animal had prepared its ammunition before wasn’t equally comic...
Santino had shown that it can implement a plan, that it can design a strategy. In other words, the animal gave evidence of knowing how to look beyond the present moment and project revenge.
None of us had thought that there is nothing in the world more dangerous, in a victim of an injustice.
By the way, from the perspective of animals, what else is being closed in a cage for the rest of life, with your jailers that enjoy watching you?
Therefore our attention was focused on the launch of the stones and not on reasons for the launch itself, much more important.
That was typical.
Santino was just the beginning. Santino was just the first. Santino was just an example, and that wasn’t so typical…
In fact, one day the elephant, having nothing else, has begun to raise its own feces with the trunk and to throw it to its guests and their deafening cameras.
The tiger, which the evening before ignored the dinner meat, made it going bad and hurled it beyond the bars, just over a family and their inexhaustible camcorder.
The blade, well, the blade was spitting already before. But this time it showed a much better view, much better.
What happened then in the giraffe’s cage astonished everybody. The mother looked straight into the eyes of the son and it did the same. It was certainly a look of understanding, their own. Then the female lifted the puppy with its head and projected it over the cell, just on a bunch of fatties, full of potato chips and soft drinks.
"Run!" It seemed that its mother cried out with eyes. "Go far from here… you can!"
So on, each animal gave evidence of its rebellion and its desire for revenge.
The rhinoceros and the gnu, the bear and the kangaroo, the antelope and zebra, all prisoners of the zoo, without exception, started to rise up.
And once again, while the clamor was there for all, the main fact was ignored.
Santino, a chimpanzee that had learned to dream of a future in which balance the accounts with fate, an animal that had really opened the eyes for the first time in his life, closed them forever.
A little girl noticed it, trying to attract the attention of his father, which ignored her, too taken by his cell phone.
"Look, Dad," she said, fascinated, "the monkey is smiling..."
Being able to smile.
Nobody ever knew that it and only it had always been its dream…

Los Angeles Times, Article By Karen Kaplan, March 11, 2009: Stone-throwing chimpanzee displays human-like planning abilities.
Santino knew the humans were coming. So each morning, he trolled for stones and fashioned concrete disks to be stashed in strategic locations until it was time to hurl them at his pesky visitors.
As a chimpanzee, Santino wasn't thought to be capable of anticipating future events in a way that so closely resembled human behavior. But cognitive psychologist Mathias Osvath became convinced after watching the 30-year-old primate repeat his routine for a decade, according to a report published this week in the journal Current Biology.
Santino began throwing stones at zoo visitors in 1994, soon after he became the dominant chimp at the Furuvik Zoo in Gavle. For three years, the episodes were infrequent. Then he began bombarding his guests on a regular basis, prompting his keepers to investigate.
They conducted stakeouts and observed Santino scooping rocks from the moat in his island enclosure and organizing them into neat piles. Sometimes he would break off pieces of concrete from the center of the island and fashion them into "manufactured missiles," according to the study.