Stories and News No. 15: Bush, the shoes and the democracy’s cost 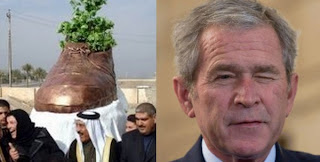 From the first interview with the shoes thrown to George W. Bush:

First of all, I don’t know how should I call you... What about Left and Right?
L: Good.
R: Okay.
How did you comment the condemnation of your boss?
L: Boss? I have no boss!
R: Principal, principal is okay.
So what?
L: It’s a shame! That man and his father made choices that have caused millions of deaths only in Iraq, from the embargo until the tragedy of so-called peace mission, and yet they can enjoy their wonderful retirement, while the only person in the world that had the courage to give them what they deserve is sentenced...
R: Pulling the shoes to people is not a civil response. There are other ways to express your disappointment to those you criticize...
So, Right, you didn’t support your… principal’s action?
R: Absolutely not! All people in the world saw us acting like animals...
L: I don’t care of what all people think! We are heroes here!
R: Oh no, my dear! The principal is the hero; we’re just shoes...
L: Just shoes? You’re just a shoe. Since the day we were launched to Bush, I am not just a shoe, but the symbol of Iraq that has seen the truth, of the Iraqis that don’t forget and all those who perfectly know who is responsible for our misfortunes...
R: Really? I didn’t see anyone launching shoes to Saddam... he had no responsibility?
L: Saddam has been hanged to death...
R: Do you mean that Bush should be hanged?!
S: No! I’m against the death penalty.
R: So what do you want?!
L: What do I want?! I remind you that we’re still here, at the feet of our principal, as you call it, and that we’ll stay three years in jail with him...
R: Exactly! We pay for his act too... He should have throw just you!
L: If he had taken Bush’s face with the first shot, as I wanted too, your participation would have been useless…
Sorry, I remind you that even in that case your boss, or principal, would have been convicted and you with him...
The silence followed these words, a perplexed and confused silence.
R: It’s always the same story... Someone makes bullshit and others, and if they don’t agree, pay the consequences...
L: It’s the democracy, my friend. That’s not what you wanted?

The Guardian, Friday 13 March 2009: Three years in jail for journalist who threw shoe at Bush.
Dressed in an old beige suit, with dark rings under his eyes, and a five o'clock shadow, Muntazer al-Zaidi looked more hard-pressed journalist than Arab folk hero as he entered Baghdad's central criminal court yesterday morning to face charges of assaulting a foreign head of state, namely one George W Bush. The last time the man universally known as "the shoe thrower" appeared in court, three weeks ago, he sported a scarf in the colours of the Iraqi flag and put on a bravura performance, telling of his outrage and uncontrollable emotions when Bush spoke at a news conference on his farewell trip to Iraq. Yesterday, he was mostly subdued. It wasn't until the judge handed down the sentence - three years in a prison - that he burst into life, though his shoes stayed firmly on his feet. "Long live Iraq!" he shouted before being led away by a heavy security detail.