Stories and News No. 16: Diversity is a gift 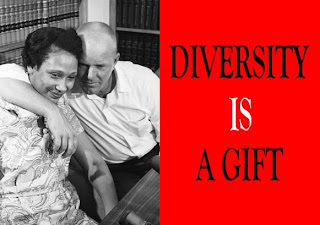 This week I will dedicate the “Stories and News” section to Mildred and Richard Loving, the central characters of the novel I will tell Friday in Rome:

From the text of the show... the Story:

An hour later, the outside world didn’t knock on the wall that they had raised around their bold life plan. It smashed that wall; it broke their shields into a thousand pieces, laughing and enjoying as an incredibly sadistic person.
By the way, the contempt that Mildred and Richard read on the officials’ faces in the Police station, not to mention the cell companions with whom they had both waited the arrival of the judge, were not the sweetest.
"When you go off the topic," a teacher once said to Richard, "you have to know better where you are going than when you were still on the traditional path. Because if you take the wrong road, you're failing for all of your companions, regardless of the stupidities they are writing..."
After an interminable night, they both felt the joy to see each other.
"Gentlemen, the Judge," the policeman said. Mr. Roberts reached its location and having seen them through his thick glasses, invite the sheriff to speak.
The man, after having launched an incredulous look at Richard, gave his testimony.
Their lawyer, who could not be farther from the defendants, according to the most classic scripts, appealed to the clemency of the court.
The highest representative of the latter, when he was listening, watched carefully them, especially Mildred, as an entomologist faced with insects of particular rarity. Then, references in the hands, he read his charges: "Richard Loving, Mildred Jeter, you are accused of violating the Code of our State, which prohibits Interracial couples to marry outside the boundaries and then back in Virginia. Lawyer, how the defendants declare themselves?"
The Lawyer turned his head toward the couple, asking the permission to say what he had advised them before. However, they ignored him. Richard looked at Mildred's eyes and she returned with an unheard intensity. Her husband took her hand and with a pride that only love may built, with great care on each individual letter, said: "Not guilty, your honor."
"Someone else is ..." Mildred thought with an enormous anger in the belly.

Mildred Delores Jeter was of African and Rappahannock Native American descent. Richard Loving was of European descent. They met when she was 11 and he was 17. He was a family friend and years later they began dating. They lived in the Virginia, where interracial marriage was banned by the Racial Integrity Act of 1924. When Mildred was 18 she became pregnant, and the couple decided to marry, traveling out of Virginia to do so. Mildred later stated that when they married in 1958, she did not know their marriage was illegal in Virginia, but she believed her husband did. They married in June 1958 in the District of Columbia, to avoid the Racial Integrity Act, a Virginia state law banning marriages between white and non-white persons. After their return home to the tiny town of Central Point in Caroline County, they were arrested in the middle of the night by the county sheriff, who had received an anonymous tip. The Lovings were charged under Virginia's anti-miscegenation law with "cohabiting as man and wife, against the peace and dignity of the Commonwealth."