Stories and News No.18: When the heart wins 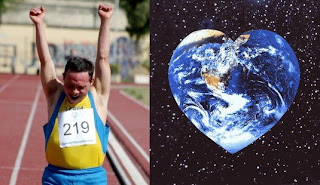 “Tum tum… tum tum… tum tum… tum tum…”
Look at the Mayor Alemanno… must be nine ‘o clock.
I thought he were taller. On TV Right politicians ever seem higher...
Come on… come on… it’s starting!
I feel good, I’m strong. Despite the age I’m strong.
Look, look at all. I’m one step away from the fifties and I run together with the world champions. I’m talking about the Africans, of course, but for now, until the race is over we’re all champions and that’s the beauty of the race: black or white legs, we run all the same.
Rome is a really beautiful sight while you’re running. It’s so different from yesterday, when I arrived by car. It seems another city.
I feel fine; I have never felt as good as now. Maybe the reasons are the adrenaline, the excitement, the applauding hands. Perhaps the fact that it’s not cold as the newspapers said.
But you know, the newspapers don’t ever tell the truth...
Hey, watch that man! I’ve never seen awry legs like those... Look at that belly! Good, you will loose it. Very good! Forget the diet. Run, my friend, run and you’ll know what feeling beautiful means.
How many kilometers have I done so far? No, I don’t have to think about it, it’s a mistake! Never think about the distance when you're in the heart of race. In the heart of race! But where do I find these ideas?
Who knows what being the first means? I’d like to know…
It would be a dream being the first before all, first before those behind and those who look, especially the latter. Those who look the other running are more than us, if we consider the television too.
Now it’s obvious: the TV makes everything bigger than what it is.
It would be wonderful, at least once in my life, to experience the victory but it would have no meaning if those who look and shake hands, smiling at me because I’m the first, weren’t there.
They understand that I have exceeded all obstacles; they see that I have survived until the end; they admire me, because I was ready to bet my life too, to reach the finish line.
“Tum tum… tum tum… tum tum…”
Now it's over, the Africans have won; nothing new.
“Tum tum… tum tum…”
I also have finished my run. I’m not the first, but it doesn’t matter.
“Tum tum…”
I gave everything for this race, no one has given more. And nobody can remove this victory.
For ever.

AFP News Agency:
Italian Marco Franzosi has died of a heart attack after taking part in the Rome City Marathon on Sunday, AFP news agency reports.
The 46-year-old was described as an experienced athlete. He completed the 26 mile course in just over three and a half hours.

PS: It was hard to find some news. I look at the official site too, but I didn’t find anything…