The importance of the Centre of gravity: in Italy the Extreme-Right has the power.

April 29, 2009
For many reasons we are used to see Italian Parliament, particularly the Chamber of Deputies, represented in this way: 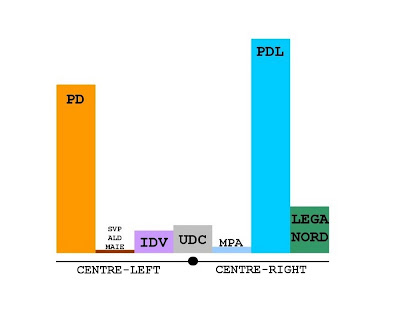 Centre-Left on one side and Centre-Right on the other, divided by the Centre, or more precisely by the Centre of gravity, indicated by the black dot in the middle.
If we want to describe the parties that are no more represented too, we can imagine it like this:

In an ideal world, especially created by our imagination, the Centre of gravity coincides exactly with the geometric centre.
In Physics this happens if the body (the Parliament) has uniform density.
The density directly influences the weight. Applying all to the Chamber of Deputies, we can deduce that the centre of gravity corresponds to the geometric centre in proportion to the weight uniformity of the parliamentary groups themselves, according to the actual results of recent elections.
In other words, the Chamber has a uniform balance in relation to the wishes expressed by Italian people in 2008 if each elected party has a power of influence over the others based on the true number of parliamentarians.
The reality of recent years, despite what the newspapers and television stations tell us, is very different from what we prefer to believe.
In the real world there is a party that since it is on the political scene it affects the rest of the Parliament, no matter how many deputies it has.
This is the reason why in the Italian Parliament the Centre of gravity is far from the geometric centre but has significantly shifted towards the point with greater density, weight and power: the extreme right.
So the true representation of our Parliament is the following:

Basing on this picture, the tragic period that Italy is going through during these years is explained much better...