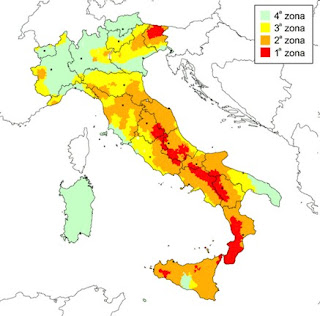 It’s not time for polemics, someone wrote. This is the moment for solidarity, someone else has said. I agree. I worked in the world of solidarity for fifteen years and I learned something. If we want to help people who are suffering because of a tragic event, two things make the difference: quality and time.
Quality of help we offer, in other words, an aid that must match people needs, which must arise from them and not the contrary, for example.
Time is not less important, time that we really choose to sacrifice for the tragedy, remaining close to people, especially when all forget them...


The Italian earthquakes* and the day after we don’t want:

The earthquake in Molise (2002):
The 2002 Molise earthquake was a magnitude 5.9 earthquake that hit the Italian regions of Molise and Puglia on October 31, 2002 at 10:32:58 (UTC). The depth of the earthquake was 10.0 km (6.2 miles).
Most of the victims of the earthquake suffered when a school collapsed in the town of San Giuliano di Puglia. 26 of the 51 pupils there died, together with one of their teachers. In particular, none of the 9 boys of the 4th class (born in 1996) survived.

The day after:
In 2007, a website of Termoli (primonumero.it) claims mismanagement by President Iorio of amounts of money that have arrived. In particular, they were used only minimally for areas of the crater; the rest were for other projects, some of which very little relevant to the emergency. Many media resume the dispute.
In June 2008 a new debate came out about the destination of the funds. Their end was advanced of six months by Giulio Tremonti, Minister of the Berlusconi government No. 4, to support the abolition of municipal property tax on the first house.
The first of January 2009 the 13 Mayors of the Molise municipalities that were affected by the earthquake of 2002, with a letter to the Prefect of Campobasso, have resigned. Their intention was to protest against the failure in Parliament on a decision about the taxes and contributions suspended after the earthquake six years ago, that the government want it back.


The earthquake of Saint Lucia, in Sicily (1990):
The earthquake of Saint Lucia was a seismic event of high intensity in the middle of the night of 13 December 1990, which interested a large part of south-eastern Sicily.
It was so called because it occurred during the festivity of the patron saint of Siracusa, Saint Lucia, which is celebrated the 13th of December.
The intensity was about the eighth-grade of the Mercalli scale and classified as a magnitude of 5.1 on the Richter scale.

The day after:
The earthquake involved part of the heritage buildings of historic and artistic Val di Noto, sites included in UNESCO richness. The majority part of damage has not yet been repaired. The earthquake was controversially called the "Series B Earthquake" because after the initial outcry it was soon forgotten by the mass media and also by the national politics of the time (just think that some victims had not received compensation for ten years).

The day after:
The Italian government spent 59 billion lire on reconstruction, while other nations sent contributions. Germany contributed 32 million United States dollars (USD) and the United States 70 million USD.
However, in the early nineties a major corruption scandal emerged of the billions of lire that actually disappeared from the earthquake reconstruction funds in the 1980s. Of the $40 billion (or 40 thousand million) spent on earthquake reconstruction, an estimated $20 billion (or 20 thousand million) went to create an entirely new social class of millionaires in the region, $6.4 billion (or 6,400 million) went to the Camorra, whereas another $4 billion (or 4,000 million) went to politicians in bribes. Only the remaining $9.6 billion (or 9,600 million), a quarter of the total amount, was actually spent on people's needs.
Italian novelist Alberto Moravia declared: "Suddenly, the brutal truth recovers the connection between me and reality. These smashed up wasp nests are houses, residences...actually, they were."


The earthquake of Belice, Sicily (1968):
The Belice Earthquake had a magnitude 6.4° on the Richter scale. In the night between 14 and 15 January 1968 struck a wide area of western Sicily in the Province of Agrigento, Trapani and Palermo. Most of the hit municipalities were part of the area commonly known as Valle del Belice.

The day after:
Among the 14 towns affected by the earthquake there were countries that were completely destroyed: Gibellina, Poggioreale, Salaparuta, Montevago. The victims were 370, a thousand injured and around 70,000 homeless. There are other countries and cities which have suffered extensive damage: Menfi, Partanna, Camporeale, Chiusa Sclafani, Contessa Entellina, Sciacca, Santa Ninfa, Salemi, Vita, Calatafimi, Santa Margherita di Belice.
The earthquake of 1968 dramatically showed the state of backwardness in which those areas of western Sicily lived. The people of those countries were composed mostly by old people, women and children, as young men had long emigrated in search of work. This figure represented the social unease that the politicians knew and disregarded, as well as they neglect the consequences of the earthquake, which represented, in terms of natural disasters, one of the first and sadly famous Italian case in the history of the postwar period: the initial inertia of the government, the delay in rebuilding, the people forced to emigrate, the squalor of the slums for those who remained. The subsequent appropriations for economic reconstruction gave rise to often unnecessary works, as the city of Gibellina, a “spot” of reconstruction, planned by famous architects and artists but poorly designed confronted to the most important factor: the employment for the people and the reconstructing of places of socialization for the population.
The Palermo-Mazara del Vallo highway was financed and built, which was nicknamed by many as the “desert highway”, rather than deal with the reconstruction of roads linking the villages, more essential and urgent.
Here is one of the phrases written on the walls of the ruins: "Bureaucracy kills more people than earthquake".

Now it’s particularly time for solidarity, but also for memory...