Stories and News No. 24: My name is Rashida and I have beautiful legs 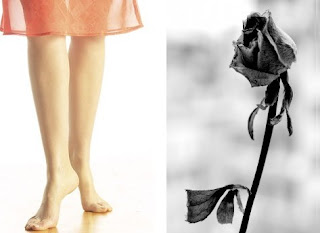 From Rashida Kirimova’s diary, the evening before her death:

My dear Diary,
I perfectly know that I am old enough to stop writing here...
However, when you have nobody to talk about something important, when no one seems to think like you, when you desperately want to believe that you are not alone seeing like that, the only solution is to put it on paper, black on white.
The vantage is that you can always read it and discover that, at least there, it doesn’t seem so bad.
Indeed, it’s the contrary. For this reason, I will write it here, now: I have beautiful legs.
It’s not enough, I don’t need to be modest facing the truth: I have wonderful legs.
The line is perfect, the skin is smooth and velvety, the knees are undoubtedly proportional and my ankles, well, and my ankles seem those of a valuable sculpture.
I could talk about the legs but I don’t necessitate: if this is the prelude…
Mom never told me, but she thinks so. I just look at her eyes to believe, or at least I wish.
The problem is not my mother. The problem has never been my mother. The fact is that my father cannot love me just as Rashida; I am a daughter, more than all. And is an unequal struggle, because being a daughter means a billion things while Rashida is just me...
Sometimes, when he is another time angry with me for how I dress, I think that probably he does because he loves me and he wants to protect me.
However, these are only few moments, when I find myself believing in what hurts me less.
The reality is completely different.
The Beauty doesn’t need to be protected but shown.
The right to show her should be defended.
The Beauty should be known by everybody, because she’s the one that inspires art.
And men, without art, are like a rose without water.
The Beauty, when she is free, becomes even more beautiful than she is.
We don’t have to fear the Beauty, because she’s the only weapon we have against the running clock.
We only have to remember her.
There are those who paint her, there are those who sing her with verses, there are those who transform her into musical notes, but there are also those who marry her, who embraces her every day in the morning, who gives her a kiss before going to bed.
What about me?
I will stop her here for ever: my name is Rashida and I have beautiful legs.
It’s never enough: wonderful legs...

From MOSNEWS - Apr 13, 2009: Muslim father orders daughter killed over short skirt.
A Muslim resident of Russia’s St. Petersburg has hired killers to rid him of a daughter who disrespected Islamic laws by wearing short skirts.
The police detained Gafar Kerimov, 46, after he reported that his daughter went missing, but blurted out that the girl was dead already, Komsomolskaya Pravda newspaper reported Monday.
The family, ethnic Azerbaijanis, used to have frequent arguments about how the daughter should dress and behave.
Rashida Kirimova, 21, studied medicine at a St. Petersburg school and waved away her father’s criticism when he said her clothes weren't modest enough and unfit for a Muslim girl.
During winter, Rashida wore high-necked sweaters and long trousers, causing no problems in the neighbourhood, but when spring came, she put on a skirt that left her knees exposed.
The father’s Muslim friends again started reproaching him for being negligent and allowing his daughter to walk around dressed like a fallen woman. They said the insult could only be washed away by blood, and introduced Gafar to a killer, who agreed to help him for around $3000.
The killer, Kadyr Suleymanov, seized the girl on April 8th as she was hurrying to classes. He and two accomplices drove her out of the city to a suburban dump, shot her dead and covered her body with garbage.
The body was found by the police after the father confessed he had ordered the killing. Two of three criminals have been detained.