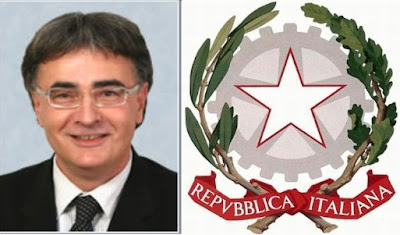 The hall of the Caravaggio’s Municipality is almost deserted. The stranger, the non Eu citizen, the illegal immigrant, soon no longer such, is accompanied by his wife and some family friends. They are not many but good ones.
Mayor Giuseppe Prevedini waits in the background with a fake smile on his face. He is not alone and with him we can see the inevitable counsellor, assistant, trusted employee, all together in the same person.
"Look at this guy..." Prevedini murmurs to the latter. "He married one of our women..."
"It’s a shame,” the counsellor comments.
He always speaks like this. He underlines, stresses and supports the mayor's words, whatever they are, almost always.
"Good morning", the future Italian says, with wife’s left hand in his right one. The voice is a little tremulous. The man is obviously excited. This explains the black sunglasses to reassure his eyes and the uncertain walk, sustained by the woman with him.
"Good morning to you," answered Prevedini, further enlarging the alleged printed smile in the face. "If for you is fine, I would start immediately. This morning I have so many commitments..."
"Sure!" The man promptly exclaims. It is inevitable; he cannot wait any longer to go in the law land, especially after the last government’s attitude in matter of immigration…
"Counsellor, give him the text of the oath," the mayor abruptly says.
The assistant obeys and the man is in front of the formula.
Few lines and he will be safe, free, a finally integrated person.
Suddenly, time stops. The worried woman starts to look her husband’s forehead. It’s convulsively tense and drops of sweat begin to surface on the skin.
"Excuse me ..." she says, shifting his gaze between Prevedini and his collaborator. "But how can he?"
"What?" the mayor asked, while he is controlling the phone calls.
"The paper..." the woman answered.
"My husband cannot read it..."
"Really?”
The mayor’s fake smile turns into a real fleer. "This is the product of the Left. These people arrive here to use just their rules and don’t loose time to learn the language. Get out of here!" Then he takes the oath document away of the man’s hands. "Come back when you can read it."
"No," the wife insists, while the man cannot speak any word, victim of anger mixed with sorrow, "you did not understand… my husband..."
"Mayor..." the counsellor tries to say. It is the first time since he is there that he speaks to Prevedini without being questioned. The fact is that he has understood...
"I said get out of here!" the Mayor repeated, instilling further anger in his voice. "If you want to become Italian you should know how to read."
"But my husband ..." the wife unnecessarily continues.
"Mayor..." the assistant says, with no better luck. He is not used to have the initiative and it is evident; the voice is weak and insignificant.
"Go out!" Prevedini cries. "Don’t make me call the security guards..."
The woman is going to speak again but the man finally moves. He takes his wife’s hand and invited her to leave.
"But dear ..." she says with tears in the eyes.
"Let's go," he exclaims, "I will learn to read..."
"But how you gonna do?"
"I know... Trust me."
The two get out and the counsellor wants again to be heard: "Mayor..."
"What is it?" Prevedini asks. He is angry but satisfied.
"Sir, the man’s problem isn’t he can read or not..."
"And what else? He is perhaps blind?"
"Yes ..."
An awkward silence follows the conversation that closes the scene. The zoom camera closes on them and goes back, like the stranger and his wife, the clandestine and his lovely partner, the illegal immigrant and his Italian love.

He cannot read Italian; Lega Nord mayor denies citizenship. Egyptian cannot read the Constitution oath.
An Egyptian immigrant cannot read Italian and the Mayor of Caravaggio (Bergamo) does not grant the citizenship. Yesterday when the mayor, Giuseppe Prevedini, has given the formula of the Constitution oath to him, he - who have long lived in Caravaggio and is married to a woman from Bergamo - admitted he could not read our language. Even if the law does not provide knowledge of the language, Prevedini was adamant: he should learn.

P.S.: According to data published in 2005 by a research in the University Castel Sant'Angelo by the UNLA (National Union for the Fight against Illiteracy), nearly six million of Italians are totally illiterate. They represent the 12% of the population against 7.5% of the graduates. Italy is lagging behind 30 countries among the more educated. Only Portugal and Mexico have a higher rate...