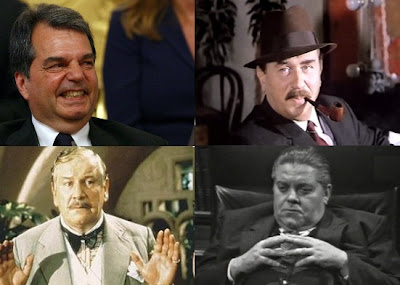 A letter to Minister Brunetta:

Dear Minister Brunetta,
I am one of Italian fatty policemen.
Your words - I quote: you cannot send a 'fat officer' who did nothing but paperwork, down in the streets - did not offend me.
And this for a simple reason: I am proud of my overweight belly.
Yes, I admit, I love good food.
I just passed the forty and a serious knee injury does not allow me to be the man I was ten or twenty years ago.
After work my life has become more sedentary, the money is never enough and so, the only pleasure I have now is when I use a spoon and a fork.
My wife is good in the kitchen but I am great too.
In reality, I am the best chef in the house and this is the reason why you can always be satisfied on our table.
Everyone says it, including my mother-in-law and God knows if it's not a miracle to get her compliments...
So I do not write you because I am hurt by your speech, rather to help you, because your words show that you are not familiar with the literature masterpieces.
A minister who flaunts such failure is indeed a shame, not an obese policeman…
“You cannot send a fat officer down in the streets,” you said. “We need to change the very concept of safety; it has to be done by those that know what they're doing”, you added.
If what you say were true, then Agatha Christie would have invented an unreliable investigator when she wrote the first novel about the exploits of Hercule Poirot.
You did not offend me; you insulted Poirot, a detective with a remarkable calmness and a surprising capacity to reflect; an incredibly accurate and insightful man, with an exceptional flair, very winning weapon against the most intricate cases.
However, he is old, just over a meter high and fat.
Yes, Poirot is a fatty.
However, it’s not finished here.
You said that ‘we cannot send down in the streets a 'fat officer' who did nothing but paperwork.’
If your assertion were correct, well, Nero Wolfe is a bluff.
The investigator born by the pen of Rex Stout solves the most mysterious crimes remaining placidly sit on a comfortable armchair in his consulting room. Indeed Wolfe almost never comes out from his apartment, close between the greenhouse and the kitchen. Yes, the kitchen. The prove is he weights about 150 kilos and is a true gourmet.
How do you see, Nero Wolfe is a fatty too.
The last but not the least that you are disregarding is the Commissioner Maigret, famous character of the novels of George Simenon.
Maigret is always tormented by colleagues for his investigative method; he does not even define it as such. The detective literally immerses himself in the crime scene and thanks to his incredible instinct and his extraordinary capacity of analysis he examines the psychology and particularly the humanity of people, discovering in the end the real cause of every misdeed, hidden in the depths of soul.
However, you have to know that Nero Wolfe is a stout man, with broad shoulders, and above all an avid lover of good food.
Yes, even Nero Wolfe is a fatty.
I stop here, my dear minister.
I conclude with a suggestion: before making your next public speech, take a look at a library...

POLICE: BRUNETTA, TOO MANY 'FATTIES' BEHIND DESKS
Rome, 28 May - More policemen on the streets and less behind desks. Renato Brunetta, Italian Minister for Public Administration spoke about the Italian police force, in an interview last night by journalist Klaus Davi, during his talk show 'Klauscondicio'. "How could I not agree that we need more police on the streets to guarantee our safety? Less bureaucracy and more police on the roads, close to citizens: I think no one could disagree with that". Minister Brunetta explained that it may be more complex than it seems: "It is no easy to go from sitting behind a desk to patrolling the streets. You cannot send a 'fat officer' who did nothing but paperwork, down in the streets: they're going to bite his head off. We need to change the very concept of safety; it has to be done by those that know what they're doing". "Why do we need to apply for passports in a central police station? Let the bureaucrat deal with the bureaucracy and let the policeman with the gun and the truncheon be on the road, in police cars, in helicopters. This is safety. Safety is not bureaucracy, but unfortunately most of the workforce employed in the police corps is doing paperwork, therefore bureaucracy".