The Pope is on Facebook: God requests his friendship and him...

This is the Press release sent today by St. Peter, the Lord’s Press officer:

This morning the Lord with a capital L - otherwise embarrassing misunderstandings could happen... - has read with great pleasure the news about that Pope joined Facebook.
The Lord with a capital L surfs the Web 2.0 since a long time and He subscribed to the famous social network months ago.
However He has only two Friends contacts:
St. Peter (myself)
Lucifer (but he sends Him a lot of viruses...)
So when He knew the good news, the Lord with a capital L went on Facebook to request friendship to Pope Ratzinger and He found this page: 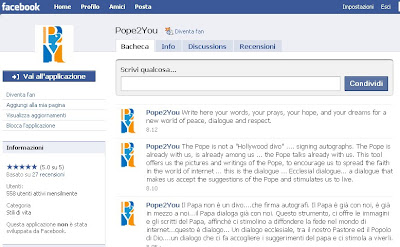 It is needless to say that the Lord with a capital L did not like what He found…
First of all, it is not possible to ask the friendship to the Pope.
My boss counted very much on it, because then He would have imported the many Pope’s friends to His space.
Nothing, there is no way to be friends of the Pope.
"Why he is on Facebook if you cannot become his friend?" the Lord with the capital L asked.
Then He read the welcome message on the page:

The Pope is not a “Hollywood divo”… signing autographs. The Pope is already with us, is already among us… The Pope talks already with us. This tool offers us the pictures and writings of the Pope, to encourage us to spread the faith in the world of internet… this is the dialogue… Ecclesial dialogue… A dialogue that makes us accept the suggestions of the Pope and stimulates us to live.

We have heard Him screaming all over the paradise. The Lord with a capital L was out of head.
Why?
First, why Ratzinger speaks in third person? The Pope here, the Pope there ... I am Ratzinger; I am here, on Facebook! It is so difficult?
“He reminds me that Berlusconi," the Creator said, “the man that forced me to become the Lord with the capital L! When Silvio is on TV ever says the President here, the President there, the President down, the President up... Hey! You’re talking about yourself! It seems that you’re referring to someone who doesn’t exist..."
However, the fact God really did not like was this idea of dialogue.
‘Ecclesial dialogue’, it is defined there.
"But what does this mean?" the Lord with the capital L exclaimed. “After the Peace War, here we have the Ecclesial Dialogue!”
By the way, the reason of God's indignation is understandable.
A dialogue is a conversation among two or more persons, otherwise it is a monologue. Honestly, in the text of the page presentation is well explained: A dialogue that makes us accept the suggestions of the Pope. Okay, the Pope gives his advice and the People of God – the Lord with a capital L’s possibly friends contacts... – receive it.
“It is a monologue,” God concluded, “I see, like the window in St. Peter's square, like every place the Pope speaks. Why didn’t you say it? We must be clear, honest, and direct. Ecclesial dialogue…”
What can I say…? The Lord with a capital L is still irritated.
If Pope Ratzinger could make just a fan page on Him, it would be a way to rebuild a true dialogue...

Update 5 p.m.: the Pope2you administrators blocked my account and erased message the on the page…
A coherent idea of dialogue…

Pope on Facebook in attempt to woo young believers
You won't get an email saying Pope Benedict added you as a friend and you can't "poke" him or write on his wall, but the Vatican is still keen to use the networking site Facebook to woo young people back to church.
A new Vatican website, www.pope2you.net, has gone live, offering an application called "The pope meets you on Facebook," and another allowing the faithful to see the Pope's speeches and messages on their iPhones or iPods.
The Vatican's World Communications Day this Sunday is devoted to communicating the gospel with new technologies.
"We recognize that a church that does not communicate ceases to be a church," said Monsignor Paul Tighe, secretary of the Vatican's Social
"Many young people today are not turning to traditional media like newspapers and magazines any more for information and entertainment.
"They are looking to a different media culture, and this is our effort to ensure that the Church is present in that communications culture."