Hi everyone and welcome to the most desired prize of the net: the Best Cynical Site 2009, recognition to the most cynical web sites.
Even this year it was not easy to make a choice.
Cynicism is now a top value in all areas of the world.
It is normal that it invaded Internet too.
The jurors had spent many incandescent hours trying to find a common agreement on the choice to do and we want to ensure that all concurrent sites were worthy of getting on the podium.
The research of the winner lasted until the judges have heard the news of the death of three workers in Sardinia, in the Saras refinery.
As you all know the cynic has no scruples, or saying it as Oscar Wilde he is one who knows the price of everything and the value of nothing.
Anything includes death too.
People who can ignore it even when it is their affair, especially when it is indisputably their responsibility demonstrate an excellent cynicism.
Here it is the home page of the Saras official web site, Saras.it (10.17 a.m.): 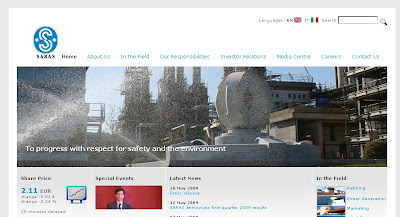 The jurors had immediately grainy eyes checking that there was no mention of the workers died the day before in one of the industries of the company.
But the thing that made them literally fall from the chair was after reading the message of self promotion, in the middle of the page:

To progress with respect for safety and the environment

At that point the examiners did not have anymore doubts.
Saras deserves the Best Cynical Site 2009, award for the most cynical web site of this year.
If we also think that Massimo Moratti, the company’s owner, while workers of his factories are dying for lack of security continues to invest mountains of money for his soccer team Inter, coach Mourinho and his players, our choice is perfectly right...

Update: a friend told me that now (1.55 p.m.) is magically appeared the following message Saras Group is deeply saddened for the tragic event involving three workers of the company COMESA where before there was a vague 'press release'. Better late than never...

Police confirm 3 dead at Saras refinery
CAGLIARI, Italy, May 26 (Reuters) - Three workers died on Tuesday in an incident at Saras SpA's Sarroch refinery on Sardinia, an Italian police spokesman said. The source confirmed a report by Italy's Ansa news agency about the deaths. The three apparently died from inhaling toxic fumes while cleaning a storage tank, the spokesman said.