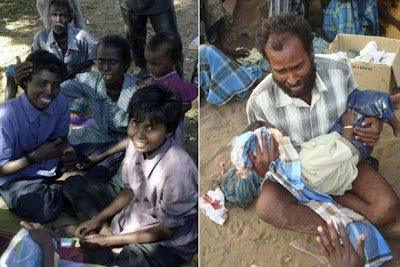 From Reuters, 11 may 2009: U.N. blasts Sri Lanka weekend attack as 'bloodbath'
The United Nations said a weekend attack in Sri Lanka that killed hundreds was the bloodbath it had feared, while the Tamil Tigers and government traded blame ahead of U.N. Security Council talks over the war.
In the latest reported assault on civilians trapped in the war zone, at least hundreds of people were reported killed on Sunday in an artillery barrage that struck the less than 5 square km the separatist rebels control.
"We've been consistently warning against a bloodbath, and the large-scale killing of civilians including more than 100 children this weekend appears to show that the bloodbath has become a reality," U.N. spokesman Gordon Weiss said.