Stories and News No.33: Marco Carta, Berlusconi, Ancelotti and Ferrari are just papers to protect me from the cold 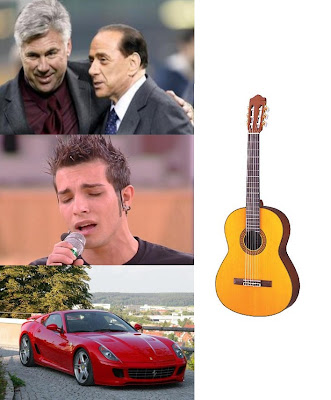 People call me The Lie and I am a busker.
Honestly, I am just a musician...
I don’t have a great voice, but I play guitar since I was a child. I did not need amplifiers and an adoring public.
I simply take my classical guitar and I play. I used to play…
I always thought that to make music was this. I never believed that I could become famous, but I have always known that I should have to work a lot to eat, because no one would have done for me.
With this idea in mind I entered for the first time in a pizzeria.
It was not easy, believe me. Before that time I had ever played for myself and no one else. I am shy, terribly shy and I never figured myself in front of an audience, even in a moment of failure to vanity. I have never been vain, I am too ugly for this and I have never liked the illusions.
However, as I said, when the stomach does not wait anyone except his proprietary, there is no time for further doubts.
“The hunger is a question that requires a single answer…” my father told me many years ago, one of the rare nights in which he was sober.
He would have said the thirst, I think, but I appreciated it the same.
So I have given a boost to my back and without looking anyone in the face I started to run my hands on the stretched strings. While the notes were fleeing away from them I felt a feeling inside that I had never tried before, an unexpected shame.
The fact is that playing for me has always meant the affirmation of my personal right, the one to speak my voice in the only way I knew.
Nothing could be farther from what I felt that night at that restaurant in the centre of Rome.
The true is that people who were there, sitting at the tables, were not a real audience and I knew well.
While I went in with my trusted companion on my shoulder, there were those who swallowed a mouthful of capricciosa and who sent down in the throat a sip of beer, who asked the waiter where the toilets were and who told jokes to friends. They were not there for me and I was disturbing them, even if with the music, mine.
And then the unexpected happened.
I finished my song and slowly, trembling like a leaf, I started to walk through the tables with my straw hat.
You cannot imagine the joy I felt seeing that rain of coins and bills dropped in the middle of my cap.
I am not here to talk about money, believe me. In that moment I loved as never before those people, because in that way is like they had told me that I gave no discomfort, that my song was not uncomfortable to them, that perhaps I would be able to return, that I was not that bad, as guitarist.
It was beautiful and I still remember today the face of each of those persons, despite almost three decades.
I don’t play anymore, I have arthritis in my hands it hurts me if I try to bend them too quickly. How could I throw them on the guitar? The music needs to speed, because the notes are never twice the in same place…
Now I have here some recent newspapers I pick for covering me and sometimes I read it before facing the night. Fortunately, the winter is past; I have crossed it almost free. So I do not need a lot of paper to cover…
I read about this Marco Carta, that his concert was suspended because there were too many people, more than the planned 2200.
I could not believe it. The article says that the place has nothing to do with all that the singer could not perform. La forza mia (My force), his song says. But what force? Marco, but how is it possible? Those people were not there for you but it is the contrary. You had to exit out of the building, guitar in hand and play at least one song for them, especially for those who were not able to enter.
If you can play, of course...
I was born in Rome, I live in Rome but for I am a Milan supporter. The reason is simple. My mother was Milanese. I have never known her and the few photos I have portray her in that city in Lombardy.
I read today that Berlusconi has said that if Milan had not won this year is Ancelotti's fault. No one has defended the coach, not even the vice president of the team, Galliani.
It is unfair. When a ship does not arrive at its destination on time, or in the worst probability it plunges, the fault belongs to everyone, from the captain to the last sailor.
It is a matter of honor, it’s a matter of style, and it is a question of honesty.
It's too easy to always blame someone else for my actions.
It is like saying that my wife Veronica, the mother of my children, left me because she read a Left newspaper...
But the bad news was not finished.
The Ferrari chiefs have said that if Mosley does not change his decision they could say goodbye to the formula one.
I cannot even drive a small normal car… For me racing cars are a dream and the Ferrari is the greatest. Don’t steal me that too...
Well, for this reason I used not to read the newspapers before I sleep.
Bad news, I find only bad news.
Now I talked enough, it’s time to rest.
It is better that I use the newspapers to cover me; reading them makes me suffer.
Maybe I should write on them.
I have so many things to tell...

PS: Ah, why people call me The Lie? Because there is nothing true in what I have just written...

Ferrari threaten to quit formula one over budget cap row
Ferrari raised the stakes yesterday in what looks like an all-out war with the sport's governing body over the new formula one regulations for 2010 by announcing that it would not be entering next year's world championship unless the rules were changed.
In what promises to be the biggest challenge to Max Mosley's role as president of the FIA the Italian team said it was not interested in competing under the proposed £40m 'budget cap' regulations. That would in effect see the sport's most senior category reduced to a 'two-tier' affair with those teams who accepted the budget cap having the advantage of technical benefits not available to those who wished to dictate their own expenditure levels...

Berlusconi on Ancelotti: 'All his fault'
During a visit to Egypt, the President attacked the Milan coach.
Berlusconi: "Ancelotti’s fault if we lost the championship".
SHARM EL SHEIK - "It’s all Ancelotti’s fault". Something must be broken between Silvio Berlusconi and the coach. It seems there could be a divorce even with the coach of Milan...

Marco Carta: Too many people at the concert
When success comes suddenly is always difficult to manage. Not only for the new 'star' but even for professionals who, on the contrary, should have more insight and a long view. In order to avoid unpleasant incidents such as occurred the other evening to the many fans of Marco Carta, the new Italian pop idol, fresh winner of Sanremo.
The concert program Monday evening in the Atlantic was suspended after the young performer proposed a medley of his songs.
The reason for the suspension is that too many people arrived. Much more than the provided 2200...