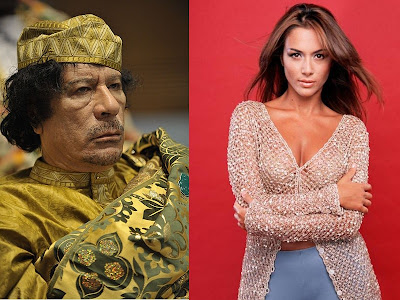 In the picture: Gaddafi and Minister Mara Carfagna

Friday, the 12th of June, the third day of Italian appointments for Gaddafi arrived.
The most important was the meeting with the Minister of Equal Opportunities and more than hundred of other women.
They are famous ladies, representative of Italian business, political and cultural Italian
Representatives, spokespersons, testimonials of one or more people.
However, as often happens in my country, when ambassadors of many arrive at the important moments, they consider one single priority: their businesses.
Thus, since the Libyan leader entered the room, the only thing they think was the one that personally affected, that touch their interests, their being women.
Yet, even in that time, they were represented by someone else.
It is today the most practiced game in : I represent you that represent him that represents someone that should represent someone else but he does not remember who...
That honor was to the Equal Opportunities Minister: Mara Carfagna.

It was not easy her government commitment, up to now and she knows it.
Many spoke about her. There were also allusions and insinuations of extreme vulgarity, but she has overcome them all.
However, also Mrs Carfagna, when she was behind the warm and rude General, she felt a thrill that made her label everything in her mind.
Consequently, as a hormonal wave, all the ladies were hit by that unstoppable energy.
The temperature goes up one degree and the security guards noticed it.
Some of them began to have an erection but they didn’t notice it.
Usual male attitude: instinctive and distracted.
The new African friend of Italians began his speech and the thrill transformed it into a hint of a huge, overwhelming and collective orgasm.
It was not what he said that penetrated them, but the tone of his voice did.
His words are old; dating back to 2003 and in other times, woman with a minimum of self respect should be angry about them.
Nevertheless, words should be heard by belly, read together with the emotions and feelings hidden in them, but we have to consider their syntax and semantics too, and then engraved in our memory if they have an important role in our present life and especially future.
In , unfortunately, women or men, it makes no difference, more powerful they are and less reminiscent of what was said the day before they become…
"The woman," Gaddafi said while the first enjoyment cry raised from the small crowd, "must be trained to fight inside the houses, to prepare an explosive belt, to explode along with enemy soldiers."
The security guards began to realize what was happening and finally became aware of their irrepressible excitement.
Other typical male attitude: they arrive early or when it is too late…
"We need to train women to have explosives in cars and make them burst in the midst of enemies," the General said, "to explode the houses to make them collapse on the enemy soldiers."
Minister Carfagna had her face recovered of hot and cold sweat at the same time.
On one hand she looked the shocking orgasmic flood that was growing inside the significant women and at the same she envied their freedom.
For once, she would have returned to be just a showgirl…
Meanwhile, the Libyan leader, the dictator who slapped the United States using an italian glove, concluded his speech: "We must teach the women to undermine closets, bags, shoes, toys for children, so that they blow up on the enemy soldiers…"
What happened immediately after is prohibited to minors.
Noemi and Villa Certosa parties, confronted to those moments, are just fairy tales…
However, what we have is just this story: words and nothing more.
Words to remember or forget in a moment, as if all had never happened…

Gaddafi and his date with 700 Italian women

So many questions. How did Silvio Berlusconi and Colonel Gaddafi become friends in the first place? Even more pressingly, how did Muammar Gaddafi - expeller of Libyan Italians, aggressive-wearer of sandals, unelected thug, deployer of hit squads, scourge of civil rights - how did this man come to refashion himself as a great friend to the females of ?

The highlight of Gaddafi's trip to is a meeting, personally requested by the Libyan leader, with 700 women from the worlds of "politics, industry and culture". So Berlusconi got down his Bumper Catalogue of Hot Stuff, got rid of any that were over 25, discarded those with a loud voice or body hair, and whittled down the rest by ballot until he got to 1,000, whereupon the disappointed remainder that didn't get to meet Muammar were given a senior post in his cabinet or a mini-break in his fancy villa with the pools and the elephants.

Before we start thinking this is just a pact of weirdness between two profoundly weird men, it is not the first time Gaddafi has extended the hand of friendship to the ladies of Europa (I do not mean the convenience store chain; I am romanticising the continent, trying to get into the mind of the mighty dictator). Two years ago in , he met 1,000 French women. His message was clear: he wanted to "save European women".