Once upon a time there was the European Parliament.
Like the other institutions, it was not designed in its current form when it first met on 10 September 1952. One of the oldest common institutions, it began as the "Common Assembly" of the European Coal and Steel Community (ECSC). It was a consultative assembly of 78 parliamentarians drawn from the national parliaments of member states, having no legislative powers.
The Parliament had been gaining more powers from successive treaties, namely through the extension of codecision procedure, and in 1999, the Parliament forced the resignation of the Santer Commission.
n 2004, following the largest trans-national election in history, despite the European Council choosing a President from the largest political group (the EPP), the Parliament again exerted pressure on the Commission. During the Parliament's hearings of the proposed Commissioners MEPs raised doubts about some nominees with the Civil liberties committee rejecting Rocco Buttiglione from the post of Commissioner for Justice, Freedom and Security over his views on homosexuality. That was the first time the Parliament had ever voted against an incoming Commissioner and despite Barroso's insistence upon Buttiglione the Parliament forced Buttiglione to be withdrawn.

Uniting so many countries and many peoples into one great nation was a nice idea, moreover basing it on respect for human rights and work for a better coexistence.
However, unfortunately, people are almost never up to their ideas...

PS: This is the turnout chart of European elections since 1979: 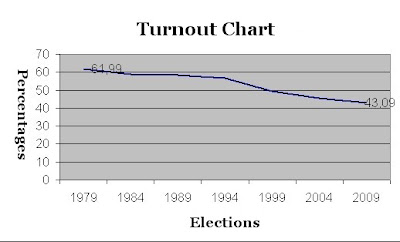 Center-right make gains amid EU vote apathy
LONDON, England (CNN) -- Voters endorsed parties of the center-right in elections for the 736 seats of the European Parliament in the midst of a record low turnout, officials figures showed on Monday.
Only 43 percent of the 375 million people eligible to vote in 27 countries visited the polls, according to European Parliament figures, continuing a fall in interest since elections for MEPs were first held 30 years ago.
Leading parties in Germany and France won seats by wide margins while even Italian Premier Silvio Berlusconi's Freedom People's Party beat its main center-left rival despite a deep recession and allegations of sexual impropriety.
In the United Kingdom Prime Minister Gordon Brown's political survival hung in the balance as his ruling Labour Party suffered a devastating rout, being beaten into third place by the anti-Europe UK Independence Party (Ukip). The far-right, anti-immigrant British National Party also gained its first European seats.
The extent of the defeat for Labour could prompt rebels to launch a leadership challenge against the unpopular Brown. With most results from across the UK in, Labour had managed just 15 percent of the vote to Ukip's 17.5 percent.
Political contributor Robin Oakley told CNN the results were a devastating blow for Labour and would pile the pressure on Brown as he attempted to face down disaffected members of the parliamentary party on Monday night. Video Watch as attacks on Brown mount »
In Germany the political party of German Chancellor Angela Merkel, the Christian Democrats, picked up 31 percent of the German vote, defeating the rival Social Democrats party, according to early returns posted on the EU Web site.
French President Nicolas Sarkozy's party, Union for a Popular Movement, got 28 percent of the French vote, fending off the Socialists Party, which brought in 16.8 percent, the EU reported.
And Italians ignored scandal, divorce action and an investigation into misuse of state resources, giving Berlusconi's ruling center-right party 35 percent of the vote. At 65 percent, turnout was the EU's highest.
Brussels enlisted MTV, the cable television channel, to try to boost turnout after only 40 percent of voters under age 25 cast ballots in 2004. Turnout among all voters was 48 percent that year, the European Union said.
Each country in the union set its own voting timetable with most going to the polls Sunday.
Voters from Bulgaria and Romania, which joined the European Union in 2007, participated for the first time.
In Spain, the main opposition conservative Popular Party won 42 percent of the vote and 23 seats, ahead of the ruling Socialists with 38.5 percent and 21 seats, according to the government's official tally. Six other seats will go to smaller parties.
Meanwhile, Greece's ruling conservative New Democracy party suffered a sharp setback with opposition socialists matching New Democracy's eight seats, with 36 percent of the vote. Sunday's election, seen as a litmus test for conservative Prime Minister Kostas Karamanlis, comes at a time of political and economic uncertainty with the economy shrinking and the country staring at a recession after nearly 15 years of high-profile growth.
The powers of the European Parliament -- the European Union's main legislative assembly -- have increased significantly since it was established in 1979, with the parliament often shaping legislation, which is passed down to national parliaments for ratification at member state level.
But there were fears that this year's contest could be hijacked by extremist parties taking advantage of low turnout across member states.