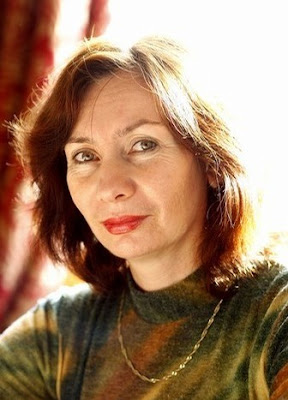 My name is Natalia Estemirova and I was a human rights activist.
I was born in Saratov, Russia, by Chechen and Russian parents.
I graduated in History at the University of Grozny and then I worked there as a teacher.
I was a widow and my husband was a policeman.
I began to gather evidence on violations of human rights in my country since the second Chechen war in 1999.
In 2000 I became a member of Memorial, a human rights organization.
In 2004 I was rewarded for my efforts with the Right Livelihood Award in a ceremony at the Swedish parliament.
In 2005, along with Sergei Kovalyov, of Memorial, I received the Robert Schuman Medal.
In 2007 I was awarded with the Anna Politkovskaya Prize.
Anna...
I worked with her.
Just until 2006, when she was killed.
Stanislav Markelov, a lawyer for Human Rights, was on our side and he was assassinated too.
Now, my time to be murdered has come.
The list of dead grows, as the shadow of blood following the government of my country, Chechnya, but more importantly, who is behind it...

Group blames Chechen leader for activist's murder
MOSCOW (Reuters) - A human rights group blamed Chechnya's president for the kidnap and murder of a prominent activist, the latest in a series of slayings of establishment critics in Russia.
Natalia Estemirova, a close friend of murdered Russian journalist Anna Politkovskaya, worked for the human rights organization Memorial in the Chechen capital Grozny and documented abuses by law enforcement agencies.
She was abducted on Wednesday in Chechnya and her body was found later in woodland in neighboring Ingushetia.
A Kremlin spokeswoman said President Dmitry Medvedev was "outraged" and had ordered an investigation.
Memorial's chairman Oleg Orlov pointed the blame at Chechen President Ramzan Kadyrov, a former rebel turned Kremlin loyalist.
"I know, I am sure of it, who is guilty for the murder of Natalia... His name is Ramzan Kadyrov," he said in a statement on Memorial's website www.memo.ru late on Wednesday.