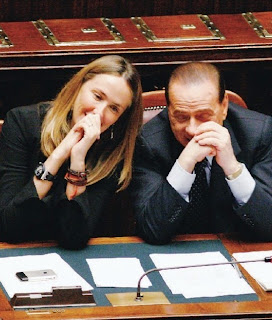 
I will continue to repeat: the words are important.

One example is enough. With four words, God is with us, we justified the extermination of millions of people.

Just two of them in Latin, Deus nobiscum, were enough to move the East Roman Empire army to the battle.

The society evolved, however, adding two more words George W. Bush blessed his bloody war With God on Our Side.

History teaches us that few words, even one is able to change a lot in the eyes and ears of those who read and listen.

With one explicit adjective you can underline a concept, with an unusual one you may tone down it.

It is a right of the speaker as the writer.

The words are a common land and the Italian press knows this.

Prestigiacomo suspected of embezzlement, our newspapers write today (Stefania Prestigiacomo is a minister of Berlusconi's cabinet, article in English).

Embezzlement (peculato in Italian) is the act of dishonestly appropriating or secreting assets, usually financial in nature, by one or more individuals to whom such assets have been entrusted.

But is the act of dishonestly appropriating things called to steal too? And is the one who appropriates other people's money called even a thief?

For several days Italian media have spread the word Escort, associated to our premier.

Berlusconi knew that I was an Escort, many Italian newspapers say today.

Foreign reporters seem to have a greater dictionary and write: Patrizia D'Addario claims Silvio Berlusconi knew she was a prostitute.

We all know that there are a lot of ways to define the so-called oldest profession in the world, much more simple and explicit than Escort…

The words are a common propriety, as I said, but they are not equal for all.

Have you ever read or heard news like Police stopped traffic of immigrant Escorts or Clandestine man suspected of Embezzlement?

No? Me too and I do not think you will never find, as no newspaper would write headlines like Prestigiacomo accused of being a thief and Berlusconi knew that I was a whore…