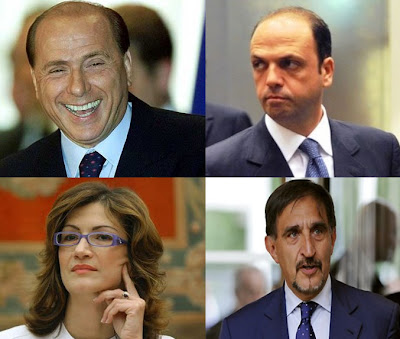 Economics Minister Tremonti commends the brilliant university reform by Minister Gelmini, who announced her next marriage.

This last event is so essential that we all were anxiously waiting for it.

A cry of joy was sincere exclaimed by each Condominium administrator in Italy.

Minister Ignazio La Russa proudly announces the approval of the last decree to increase the fund for our vital peace missions.

Since today we all sleep more comfortable.

Last but not least Silvio Berlusconi telephones to Ballarò tv talk show because - his words - he is sick in bed and complaints once again the Italian situation, unique in the Western world, between communist judges and public television with an absolute prevalence of leftist journalists and tv programs.

In the second quarter of this year the gross disposable income of households is down of 1%, a loss in absolute terms of 11 billion euro.

In August 2009, based on the evidence available to date, the index of the value of total retail sales marked a negative change of 0.1 percent over the previous month of July (data).

Regarding foreign trade, in September Italy sees a loss of 513 millions (data).

The real problem is that we pay this bill, not Mister B. and company…