It is not the State that orders us! Berlusconi? No, Hitler… 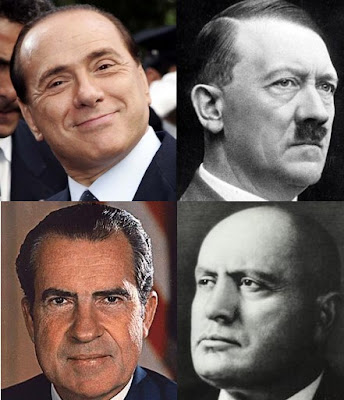 Berlusconi's reactions to the decision of the Italian Court on his immunity are worthy of great note.

I am convinced that every time our prime minister expresses an opinion without being prepared, especially about something that particularly concerns him, his true nature turns out.

It is very different from the brilliant leader that Silvio performs on stage in the speeches for official occasions, such as the G8, or the king of gaffes that makes laugh the entire world.

Interviewed by journalists, having heard the verdict of the Court, Berlusconi said: "The Court is not a guarantee institution but a political body, dominated by eleven judges of the Left against the four who are not. This is the reason why I never believed in the approval. But I'm going forward. We must govern, with or without the Alfano Law. 72% of the press is Left, public television talks shows are on the Left and the comedian programs too. Not to mention that we have a minority of very organize Left judges that use justice for political struggle."

This morning he added: "The government goes forward and if possible with more grit than before because this is necessary for the country."

What does the arrogance of this old man, with wig and tired skin come from?

Simple: he was elected by the people.

Berlusconi is what he is because he won the last elections.

You will see, especially in the next months, we will often hear this concept, because it is the only weapon that remains to him: people are on my side, people are with me.

However, although democracy is one of the most important fundament of a healthy, equal and peaceful society, we must not forget that people’s opinion is not and never will be correct by definition.

And I want you to know that I have no intention whatever of ever walking away from the job that the people elected me to do for the people of the United States.

Richard Nixon, 37th president of the United States, after the Watergate scandal.

I go forward the people and I am with the people in community of purposes and spirit.

We are "the State". We do not obey the orders of any earthly power, but we are only under the orders of God, who created the German people. We are the foundation of the State! [...] It is not the State that orders us; but it is we who order the State!