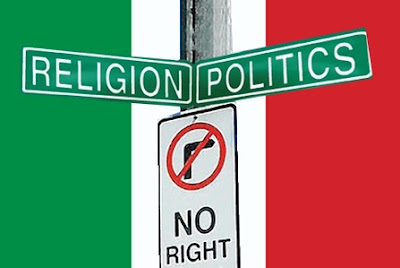 Time passes and the distance between Italian politicians and the real world visibly increases.

Sorry, we're not in these conditions, but I think the comparison is appropriate: imagine a sinking ship, with the water growing from the hold. The first to succumb, as in the famous Titanic, are ever the poorest, when their cries are ignored by the lucky ones above.

Well, if our country was that boat, you can be sure that our politicians, those who decide our fate, would be in the highest point.

But they are not like other passengers. They are not just rich travellers who enjoy the benefits of the good ticket position.

They are the ones that should remedy the flaw.

They are the ones who should have avoided the accident.

We pay them for this…

Here is proof of what I say.

In the real world, in Sicily, precisely in Messina, the authorities continue to find dead bodies, even today.

In the real world, in Abruzzo, the temperature has reached the zero and there are at least 6000 people under a tent.

In the real world, the unemployment rate is steadily increasing as the water of the sample.

Instead, what are the Italian politicians discussing?

The Democratic Party is still wondering if Paola Binetti, a senator who is a member of Opus Dei and has repeatedly asserted that she wears a cilice, is a problem for a coalition that wants to represents the laic left.

Berlusconi's Minister Gelmini, while many teachers have lost their job, is crying out for a vote on religion lessons in school.

Today both sides of the Parliament are ready to blame Islam for the yesterday attack.

In Italy religion is always the best weapon of the right and the true weakness of the left.

It is an old story, already seen and reviewed.

But it will not be eternal, I'm sure.

Because if we do not deal with the real world, sooner or later it will come knocking at our door…