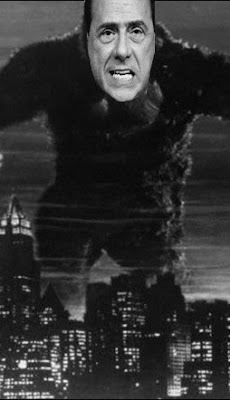 It is the end of the Bad guy and enemies are everywhere.

They are before him, today there are so many of them before him. Yesterday they were less.

Banally, you can find them on the left, less than what you think...

Here we go, the Constitutional Court issued its decision.

The evil is about to be eradicated.

The cancer will be destroyed.

The monster that has inflicted suffering to our land for at least fifteen years is finally defeated.

Certainly, part of the country rejoices.

They are decent people, persons with an adult social conscience, those who have never had compromises with their fundamental principles.

Unfortunately, they are not so many.

Otherwise, we would have a different situation now.

This is the true reality.

And the truth is that after the news of the death blow dealt to the heart of the evil, the other half of our world (indeed, more than half…) is not happy.

There are of course his allies among them.

Already today and surely tomorrow they will seem less and less, but this is obvious: the villain’s fellows have no obligation to be loyal, my friend Gennaro told me.

Remember? After each election it seemed that nobody ever voted him, but he always won.

If they were ashamed before…

However, many others begin to realize that what happened is not a good thing for them.

They are his very best friends, because they have never betrayed him.

They have always faced him with words, on the newspapers as on the streets, but in the most important place they have always been his accomplices, even on his last bad act.

Many, perhaps too many, have understood the rules of the game since Silvio entered the parliament: when the wicked man has the power, you can earn more showing to be his opponent than demonstrating it…

Over the years we have read books of illuminated by incredible bravery writers published by him.

We saw denunciation film of intellectual inspired by their heroic perseverance directors distributed by him.

We have even watched entire seasons of "satirical" programs, leaded by irreverent comedians, claiming violent attacks against him on his televisions.

Consequently billion of euros came in his pockets, rights and advertising revenues, all thanks to this kind of enemies.

Now the bad is (maybe…) going to be beaten.

The responsible for all the ills of an entire nation is to remain without any protection, naked king before the right court.

Nevertheless, today is a sad day for many people, much more than we can imagine…

Rome, 17 Sept. (AKI) - Italian prime minister Silvio Berlusconi may be forced to resign if the Constitutional Court rules against an immunity law that protects him and four other senior members of the government, Italian media reports said on Thursday. The court is expected on 6 October to rule whether the law, called the Lodo Alfano, is constitutional.