The Mafia dealt with Italian State: I am to blame 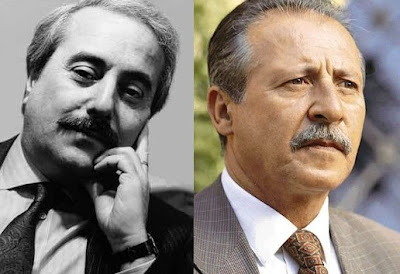 An Italian Newspaper writes today something that I fully agree, at least in our country.

I do not like it, indeed, but this is the reality: you have a story if you watched on TV.

The journalist does this premise introducing what happened yesterday during the talk show Anno Zero.

The focus theme of the TV program was about the possible links between mafia and politics in Italy, extremely topical in my country since many years.

In particular, the attention was fixed on the murders of Giovanni Falcone and Paolo Borsellino in 1992, assassinations that are still under investigation, discussion and more.

However, pretending to know nothing of the plot, as if we were spectators of a sort of suspense thriller movie, suddenly one of the main characters of the time, the former Justice Minister Claudio Martelli live said that Paolo Borsellino knew the existence of a negotiation with Cosa Nostra pursued by officers of the Carabinieri Ros.

In a film this might be a true coupe de theatre, able to give the story a great shock.

Nevertheless, we are not talking about films, here, much less of a television program.

This is Italian history, our history, of everybody who lives here in Italy, from North to South, with no exceptions.

At least it concerns those who were capable of understanding and will in that far 1992.

If a movie gains success at the box office or is a flop, the critics like it or they destroy it, everyone has merit or demerit, from producer to director, from actors to screenwriters.

If we were in a thriller novel, it is sufficient to await the end to discover the culprits.

In real life, when one of our fellow citizens is killed, it affects all of us.

Moreover, when it happens to men like Falcone and Borsellino, murdered because they were people trying to find truth that our country lacks such as the desert miss the water, we are forced to clarify our position.

Each one of us is accountable of the history of our country, because we write that history every day, willingly or unwillingly.

Obviously the load must be distributed equally, depending on the level of accountability.

When Giovanni Falcone was assassinated along with his wife and three bodyguards it was the 23rd of May, 1992.

Paolo Borsellino was killed the 19th of July, 1992, along with five bodyguards.

However, if I stop here, I would be an immature guy, the typical person who blames the State for everything.

In the summer of 1992 I was a twenty-four years man and the days between the death of Falcone and Borsellino I have been around Europe playing music in the street with a group of carefree friends.

So, I am also accountable for those deaths.

I have to give an answer too.

I must clarify my position…