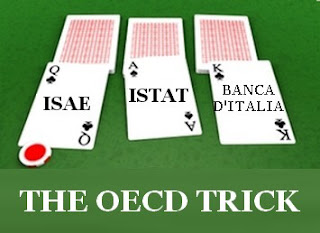 Silvio Berlusconi, during a press conference, released today some statements that have left me very perplexed.

The Italian Prime Minister said to see strong signs of an economic restart and he added that the worst of the crisis is over.

There is nothing new in this.

I am convinced that this man would be able to sell a diving suit to a dolphin.

The thing that struck me is that, supporting his words, Silvio cited the new OECD report on the latest composite leading indicators, which put Italy among the countries that have most improving economic situation, together with France, United Kingdom and China.

"Moreover," Berlusconi said, "the crisis has hit Great Britain more than other European countries, which has no manufacturing economy like Germany or us, and we are back to third place in Europe. We are the sixth country for contributions to United Nations, so things are not going badly."

I'm not an expert in economics, but in my humble opinion I do not think you have to be a genius to understand that something is not clear.

As I wrote in a recent post, the latest economic report on our country by the important statistic organization Istat is very worrying: in the second quarter of this year the gross disposable income of households is down of 1%, a loss in absolute terms of 11 billion euro.

In August 2009, based on the evidence available to date, the index of the value of total retail sales marked a negative change of 0.1 percent over the previous month of July. Regarding foreign trade, in September Italy sees a loss of 513 millions.

But then, why the OECD said that Italy is among the countries with the economic situation with best improvement?

Did they really say it? I ask, because when someone like our Prime Minister has demonstrated that he can say a thing and its opposite even in the same sentence and people vote him in any case, it is normal to have a doubt.

So I visited the official website of the OECD and I actually found the report that corroborates Mr Berlusconi statements.

This has left me even more confused.

The graphics are evident; the lines are lines, the data…

So I put myself another question: where do data used by OECD to create its report come from? Simple, from here, which are the official sources indicated by the same organization.

From what I read, among other realities and international institutions, the basic information on our country is provided by:

The Institute of Studies and Economic Analysis (ISAE), the Bank of Italy and, unbelievably, ISTAT.

We already know ISTAT report, it is totally negative, not improving at all.

Well, if math is not subjective, it follows that someone among the ISAE and the Bank of Italy inflate the figures. And to move from the bad Istat report to one of the best economic situation you need a very strong pump…