Switzerland, Invasion of the giant minarets

After the huge box office success in Switzerland, despite the negative opinion of critics, it is coming out on all Italian screens a film that promises to be the most terrifying in movies history: Invasion of the giant minarets. 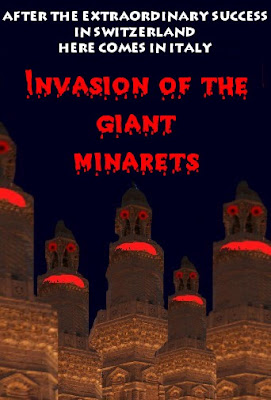 As already mentioned, the critics have unnecessarily rejected the film, accusing it of proposing an incredibly obvious plot, a true cliché.

However, the public response proves that people are not yet tired of movies that tell of invasions by ugly and bad aliens, determined to win our cities and eat our brains, but not before abusing our women.

Fantasy, after all, is good for this: it helps to exorcise not overcome fears and anxieties.

People who write and tell stories can not disregard it, furthermore who sell it to public…

Swiss voters' clear decision on Sunday to ban the construction of minarets has generated a wide range of emotions, from stunned joy to rueful concern.