Europeans and Americans are racist or someone wants they believe it? 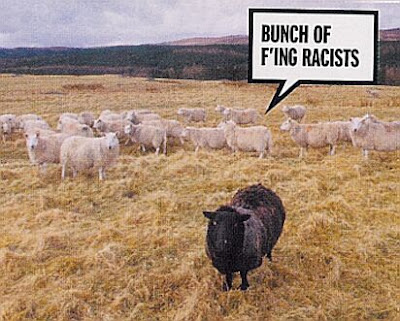 The polls are important.

In my modest school education I made too an exam on Statistic at university and, for what it is worth, I can confirm that they are a very useful tool to analyze and better understand things.

Yesterday it was released a survey titled Global economic downturn has changed little about North American, European views of immigration, which is part of a larger work called Transatlantic survey, in this case focused on immigration.

Newspapers and websites have reported the data, or those that they have found most interesting: Overall assessments of immigration as more of a problem or an opportunity have gone up slightly from last year; in 2009, 50 percent of Europeans and 54 percent of respondents in the United States described immigration as “more of a problem,” an increase from 43 percent and 50 percent, respectively, in 2008.

Respondents in all countries grossly overestimated the share of immigrants in their countries. Americans thought that 35% of the population in the United States are immigrants (the real number is closer to 14%), Canadians estimated 37% (20% in reality), and Europeans estimated an average of 24% (of the European countries surveyed, Spain and Germany have the highest share at 13%).

However, just a few has published this result: British (71%), Spanish (64%), American (63%), and Italian (53%) respondents disapproved of their governments’ immigration management.

But that is another story.

The first aspect to which I invite you to reflect is generally ignored by the media and especially by those who read the polls: the methodology used to make them.

On the press release you may read below:

TNS Opinion was commissioned to conduct the survey using Computer Assisted Telephone Interviews. In each country, a random sample of approximately 1,000 men and women, 18 years of age and older, was interviewed.

1000 people, okay? They interviewed a random sample of 1000 people per country, 1000 opinions to establish the general thought of 60 million Italians or more than 300 million Americans.

Browsing the website of the project (which it always moves to the immigration survey…), I tried to understand what criteria were used.

For example, how they handled people who do not agree to be interviewed, a figure always relevant in statistics.

However, going to the methodology page, you may find more or less the same information on the press release.

Another element that should never be underestimated is who made the survey.

It turns out that this survey is by the German Marshall Fund, the Lynde and Harry Bradley Foundation, the Compagnia di San Paolo, and the Barrow Cadbury Trust, in collaboration with the BBVA Foundation.

The official site of the latter tells it is a research institute that works on many fields, in a transversal way.

But let's concentrate on the others.

The Barrow Cadbury Trust site says it is a foundation that supports the most vulnerable people, who live on the margins of society.

The Compagnia di San Paolo is a foundation linked to the banking group San Paolo IMI and, reading the site, it appears that also deals with various researches.

The Lynde and Harry Bradley Foundation is an organization linked to the Conservatives that, again basing on the site, is responsible for supporting federal institutions, publications and educational projects.

Last but not least, here is the most important: the German Marshall Fund.

I read that this institute was created by Germany in 1972 with a gift in memory of the Marshall Plan, one of the initiatives of the United States to rebuild Europe after the Second World War.

Like this plan, the foundation maintains the same line linking the two continents, hence the term Transatlantic, working on international cooperation and for a better relationship between states.

About Marshall Plan, Noam Chomsky wrote that the amount of American dollars given to France and the Netherlands equalled the funds these countries used to finance their military forces in Southeast Asia. The Marshall Plan was said to have "set the stage for large amounts of private U.S. investment in Europe, establishing the basis for modern transactional corporations".

Anyway, everyone can freely choose which level of credibility to give at the organizations that made the poll.

All of us is free to think what prefer, but if our opinion is exclusively based on surveys which are blindly distributed, without any kind of critical analysis, you cannot tell if people are racist or not, but you may understand why they vote for a party rather than another…