Iran is considered a bridge between Arab and Asian worlds, although it does not fully belong to neither.

Italy has always been the USA bridgehead in Europe, although they officially part of that continent.

But not everyone knows that to have an official religion is not obligatory. In fact, many countries do not have and seem to survive the same...

In Iran there is a Supreme Leader, the highest religious leader, whose opinion determines the choice of candidates for president and parliament.

In Italy, the head of state religion is the Pope, whose opinion should not officially influence anything in political life, but in the real world…

In Iran, even today, women do not enjoy all their rights. The Supreme Leader said that they should not start a political career, since the meaning of their existence is to stay at home looking after children.

In Italy no political or religious leader would ever say such a thing, though, according to the World Economic Forum, in the ranking relative to gender gap in terms of participation in political and economic life, we are at 72nd place after Vietnam and just before Tanzania.

Iran applies the death penalty and many international organizations have accused the country of serious violations of human rights. 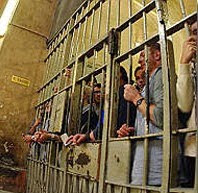 In Italy there is not the death penalty since 1947, yet this year we have been condemned by the European Court of Human Rights on inhuman and degrading treatment like torture against a detainee forced to live in roman prison of Rebibbia in just 2.7 square meters, where the European Committee for the Prevention of Torture stipulates that the minimum area for an inmate in a single cell should be not less than 7 square meters.

In Iran, the head of the government is the President Mahmoud Ahmadinejad, a leader always under the international spotlight and there are a lot of rumours about him.

Someone says that his statements, often contradictory, are designed to simultaneously obtain the consent of religious citizens and the lower classes.

He is often described as a populist leader and his declarations create always a sensation around the world.

He has not a good relationship with the international press and often accused it of distorting his words, giving a misleading and far from reality image of him.

Many international organizations blamed on the Iranian president and his government, guilty of limiting press freedom.

In Italy, despite the President of the Republic is Giorgio Napolitano, the head of government is Prime Minister Silvio Berlusconi and the description of Ahmadinejad is perfect to him too.

Iran and Italy are two distant lands, two different countries and have so many similarities.

Yet there is a huge difference: in Iran, the government has an opposition.

In Italy there is the Democratic Party...