Letter from Santa Claus to Italy

first of all I would like to thank you for the huge amount of letters you sent me.

However, I have to break with tradition and write myself. 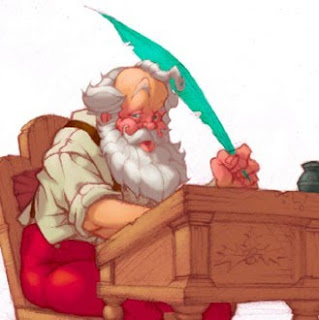 However, the fact is that you was first to violate the rules.

Yes, because the Christmas letter is for children and one for each.

Then how is it possible that almost half a billion envelopes arrived?!

You are only sixty million and the most elderly...

Nevertheless, since I am an easygoing person, the most easygoing man in the world, I started to read them all.

Because of you, I almost did not have time to prepare gifts for the Swiss and you know how much they get angry if you are late.

By the way, can someone tell me why this year they have asked so many models of minarets?

Anyways, let's get back to the point.

As I told you I read the five hundred million letters and I was really surprised...

Someone asked me to give him a house, because he is no longer able to shiver in a cold tent.

Someone asked me to make safely return his sons from the front, because he finally realized that they left for war.

Some people ask me to give them a prime minister who does not need to apologize to someone for assaulting him, because, nobody ever dreamed it, not even a madman.

Others asked me that the money for the Messina Bridge could be used to rebuild the Salerno-Reggio Calabria highway.

Someone asked me to be respected as a person and not because he has a residence permit.

Someone asked me the chance to love someone else, because he will love him the same.

Some people asked me the right to die in peace in exchange for the duty to live in pain.

Someone asked me a country where there is really freedom because he is tired of being robbed even of the meaning of words.

Some people did not even ask me to erase the Mafia, he does not expect much, but at least to know where it begins and ends.

Others wrote they accept the trains arrive late, asking that at least they did not destroy their house and life in one fell swoop.

Someone asked me to make him do anything, even the most humiliating thing, just a job.

Someone asked me to have hope, not certainty, that one day Italy will be a country neither better nor worse than others, just a normal country...

The thing that impressed me most is that many of you have sent more than a letter, as if you had been afraid that one would not have been enough, to emphasize the urgency of your questions, to mark their inevitability.

It seems that at the end of each letter there is a huge exclamation point.

I'm sorry, but I can not help…

I cannot do miracles, but gifts for your children and grandchildren.

I may only give you an advice.

It must be sought, claimed and obtained at any price, because you are convinced it is something that nobody has the right to mistreat or even steal.

You can have at any time what you want from me, because it is something already yours.

You just have to want it.

No ifs or buts.