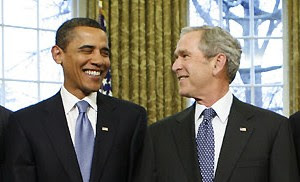 Once again I have the honor to publish a contribution by a valuable voice.

This time it is the famous American writer, Johnny C. Nick, known for his brazen manners and his rude style.

In this very exceptional case, the bestselling author of the famous book F**k you and your grandma decided to be interviewed:

Mister C. Nick, it’s an honor to have you here on my Blog:

Wow, is this the title of your next book?

Ah, thanks for the thought...

Mister C. Nick, let’s start the interview. I know that you have always been against the politics of President Bush and generally very critical of your government. The first thing I want to ask you is if with Obama, your attitude has changed…

C. Nick: But where do you come from you? From the mountains of soap?!

C. Nick: Well in fact, you do not. You understand nothing… But what do you think? Here comes the afro american president and all change?

No… but change was the slogan of the campaign...

C. Nick: Oh my god... you are entirely stupid! Excuse me, but in Italy, once elected, do politicians keep the promises they made during the election campaign?

And what about the health care reform? What do you say? Does not it seem a big change?

C. Nick: Big change?! Listen, I will not talk about reform, but try to think one moment: do you really believe that the same friends of corporations, who yesterday promoted war in Afghanistan and Iraq, just because today they vote a reform health care they become benefactors?! If Berlusconi gave a gift to a child, he would become Santa Claus?!

C. Nick: Hey, like I always say, if you don’t want to be treated as a shit, do not be a shit. That is, if you do not want me to treat you as a naive, wake up! Europeans gave to Obama the Nobel for peace and he said thank you, but he didn’t sign the anti-landmine treaty. When the president spoke of the New Energy for America, saying he was worried about global warming, perhaps you was thinking that he would automatically have signed the Kyoto Protocol? It's called New Energy for America, only for America, do you understand?

Let’s talk about Iraq. It’s easy to retire troops from there, now. The fact is that they have already done what USA needed. And now even an idiot understands that Iraq war was not to stop terrorism, because still now there are bombs dead in that unlucky country! Indeed, what did the peace president say to deserve the Nobel? He sent other young people to die in Afghanistan. Why? Because the job in Afghanistan is still not finished. And now it's up to Yemen...

What do you mean by that?

C. Nick: Memory! Memory, this is the problem of third millennium: people have no more memory in the brain. Too many electronic memory, computers and telephones hard disks… and zero memory in the head! So, you do not remember how everything started in Afghanistan and Iraq. Terrorism, bombings, Bin Laden, Al Qaeda and the show begins. United States must do show outside America, with films or wars. Otherwise we would be all poor... Wars and movies, this is money for us.

Excuse me, are you saying that between Obama and George W. Bush there is no difference?!

C. Nick: I am tired of talking because you are an incurable naive… Think about past history. In the United States, as well as in Italy and throughout the world, presidents and governments change, but did war end? Did rich become less rich and poor less poor? Did banks think less about money and more about citizens needs?! Do you want to know the truth? If you want a change, you must do it by yourself. You change things, if you can and not just with a vote. Because if you wait for elections to change, you will be stupid for ever...

The News: War in Yemen?