The Mafia is the State?

What the son of mobster former mayor of Palermo, Vito Ciancimino, said cannot be true.

In summary, from what I read in the newspapers today, Massimo Ciancimino argues that there was a pact between the boss of Cosa Nostra, Bernardo Provenzano, and the policemen who arrested another leader of the Sicilian Mafia, Totò Riina, with the aim of secreting the various documents that he concealed, documents that would have been able to bring down Italy.

But this is not possible…

Also according to Ciancimino Jr., negotiation between Cosa Nostra and the State began after the killing of Falcone and Borsellino. On the one hand Totò Riina and on the other the police and, as people informed of the facts, the former vice-president of the Superior Council of Magistracy, Virginio Rognoni, and the current, Nicola Mancino, a former President of the Senate too.

No… I can’t believe it! It is absurd…

Don Vito’s son claimed also that his father was cooperating with the Italian secret services after the kidnapping of Aldo Moro, and that he was part of Gladio, a secret paramilitary organization promoted by NATO to stop Soviet expansion into Western Europe.

This is implausible, come on…

Regarding the Ustica massacre, former mayor of Palermo’s son said too that his father was approached by Defence Minister Attilio Ruffini, upon learning that the DC 9 was shot down accidentally by a French airplane and that it was organized a covering truth operation.

How can we believe in such statements? If all were true, can you imagine what kind of country we live in today?

We would have a political class full of people under investigation, who would do anything to remain in the Parliament or the Senate, protected by their laws.

We would see a perennially under the blackmail of the mafia Government, because it would have the mafia inside, and the Opposition in the same situation, only simulating to be divergent to the majority, since both would be strangled.

And what about the press? The media would be completely conditioned by corrupt politicians and contaminated secret services, making Italy a nation with lack of freedom in press and expression.

If all this were true, then anyone could become deputy, senator or even prime minister.

It would be sufficient to have no scruples and be ready to do anything to succeed... 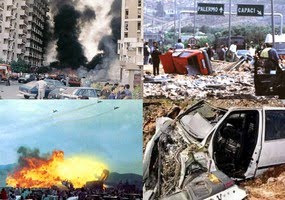