Once upon a time there was a ship.
On the ship there were many travelling people.
Almost all could not stop to watch with concern the sea and the horizon above.
Yet, among them there was someone who could laugh and play.
I am talking about Hassan and Said. 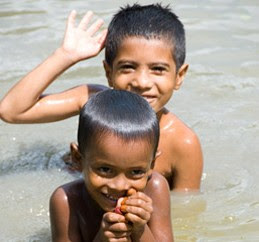 The two were both six years old and they were friends since their birth.
They called them the inseparables and a nickname had never been so right.
That’s not particularly original.
They liked and enjoyed playing together, that's all.
By the way, the two characters were perfectly married.
Hassan was shy while Said was brazen.
Said was constantly distracted and Hassan was incredibly thoughtful.
Hassan was stubborn as Said was inconstant.
That’s typical.
A day came when the sea ended and they put their feet on Italy.
The two fathers told the sons to never go far from them because in this new world they knew that them was everything they had.
However, there was no need to say it, because to Hassan and Said this was true even before they leave their home.
The following months were very hard and the obstacles that the two children and fathers faced were unspeakable.
In those moments, the two parents repented many times of leaving their lands and moreover their wives.
However, even in those difficult moments, Hassan and Said could find a way to smile and play.
It is a gift of nature to children.
Its name is lightly and it should be protected at all costs.
The two fathers finally found a home.
They were not alone in finding it.
Their luck, as the apartment, was shared by ten other passengers for life.
This was the way grandma Karima called men who were leaving for Europe and Hassan and Said liked it very much.
It seemed to be a heroic thing, and you know, children always adore the heroes.
Despite the small space in the home, Hassan and Said were almost ever cheerful.
Hassan had Said and Said had Hassan.
Every enemy could be defeated with such a treasure in the eyes.
Then the time of the school came.
The first day the fathers were very nervous, as well as the children.
Going to school was something extraordinary for their life on the road.
That class, with the desks and the teacher, where to study and learn, know and understand, was like a mainland more than getting down from the ship.
This was the feeling of the four when they climbed the stairs to the classrooms.
However, even that day, the expressions on their faces were as expected: the two dads showed anxiety in the face, and once again their sons were able to find strength in the smile of the other.
Hassan and Said had understood that even the school, although it was a place built just for them, could not be at all easy.
They were passengers for life but when they arrived in our country they had noticed that people could call them in many ways and none of them was rewarding as the first.
However, I think that now it is established how much the other's presence was invincible for both.
Like a roof ready to protect from rain and cold.
However, fate knows to be ironic, since it was a kind of roof to divide the two.
"I'm sorry," the teacher said, bringing the only Hassan in the room, "in my class I can accept only thirty percent of foreigners ..."
Then she shut the door.
Said's father called him, to lead him to his class but he had not moved and stayed there, motionless, with the memory of the frightened eyes of Hassan in their firm while the teacher closed the door.
His dad repeated his name again but it was too late.
Said opened the door and ran to Hassan, who was doing the same thing, unnecessarily called by the teacher.
The two embraced at the door, exactly on that line between inside and outside the classroom.
Here you cannot divide us, their close bodies seemed to say, here we are again in the middle between your and our fathers lands. Here we’re still travelling. Here your and their laws don’t work.
Here just love matters…

Read other stories about friendship