Students on the roof with Gandhi

Once upon a time in Milan there were four boys.

They were five, but then they became four.

We know how the five does.

It often turns into four, sometimes to six.

Alfonso was the eldest, 39 years old and collected waste on his city.

It was a noble work.

Mattia was 20 years old and to pay for studies he washed the clothes of his countrymen.

It was a necessary and worthwhile work.

David was 18 years old, but he had not an employment, as Edward, who was two years older.

Nevertheless they were young.

Nothing is more valuable in the oldest country in Europe.

The four boys wanted to study and so improve themselves.

Not everyone did the same, of course.

They were not obliged to.

It was just a desire, theirs.

I am talking about a precious desire, which should be protected as the last fire in a cold camp of a jungle valley in Milan.

Don’t tell me that there are no jungles in Milan, because I am in the creative flow and I cannot stop.

Incredibly, the city - which Alfonso made neat the streets of - and its citizens - whose dresses were made equally blameless by Mattia - decided that the boys had to leave the school.

For them it was a blow to the heart, as equivalent to stop dreaming.

So they made a gesture that many naive people call extreme.

The boys climbed on a roof.

The roof was on top of their school.

Destiny has a sense of irony, as my friend Gennaro often said, and he's right.

Gandhi would have not defined their act as extreme; rather he would have been there with them in their sacred act of non-violent protest. 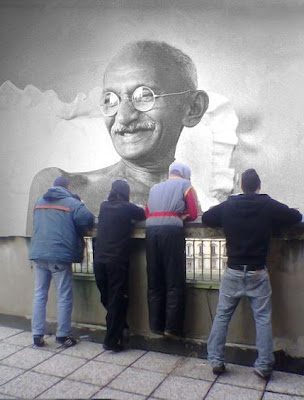 With strength, since it does not come from physical capacity, but from an indomitable will.

For the truth, that never hurts a just cause.

Aware of his morality, because morality is not following the known path, but finding your own road and bravely going after it.

Up on a roof too.

In the name of justice, because it is everything. The rest comes later.

Once upon a time there were four boys.

They were five, but then they became four.

We know how the five does.

It often turns into four, sometimes to six.

Other times, though rarely, the miracle happens and the six became seven, eight, nine, ten, and so on, until the roof collapses over the heads of ungrateful citizens...

The News: Milan steals the future to its youth.