If reality were the result of imagination the world would be different.

In Haiti the richest countries in the world would save people as good as they are to kill when they make war.

If we were living in the realm of dreams the church would be different too, since reading that a priest stole money to a disabled person to give presents at his lover, it would realize that before talking to politics should deal with itself.

If life were written by our imagination, a government that organizes against TAV a manifestation of thousand people to respond to the protest of twenty thousand, would have the decency to admit that, maybe, there is something undemocratic in what it is doing.

If our country were what we would like, after the sixth night that ten workers are sleeping on a roof, the Fiat would use the money it took from the State, to not dismiss them.

If Left Italians waked up one morning to vote a leftist man, not allied with the centre leftist, which is another thing, in dreams as in reality...

If people who want a Left opposition stopped tolerating compromises to get the catholic votes, by parties that do not really get them at all...

If that were the reality, finally D'Alema, with the mouth of Bersani…

Indeed, directly D'Alema - because this is fantasy… - noting that Democratic Party allied with catholic UDC failed to win twice in southern Italy, against a so-called radical Left man, attacked for months by the newspapers and declared homosexual too, would invite the press to declare: "The Democratic Party has failed. The PD has failed because it has not an identity. The PD has failed because it is not a leftist party, or even a centrist party, because it is not a party. The parties are liable when they come from people and we do not understand, do not listen and do not see the people. We are not a party. We are just us..." 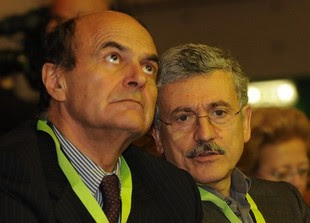