Berlusconi lyricist and the poets revolt

February 23, 2010
Stories and News No. 115
The Story:
In the afterlife:
"Giosuè, sit down, I must tell you something ..." Peter says, entering the hobby room reserved for the great Italian poets.
The saint is holding a newspaper, noted by Carducci, who obeys and sits on a chair.
"Even you," Peter says, inviting other writers to approach, "come here…"
Pascoli and D'Annunzio leave the ping pong, the former upset because for the first time was in the lead and the latter happy for the same reason.
Leopardi doesn’t want to stop with the video poker and Montale has to move him by force.
The latter too, along with Quasimodo, Saba and Cardarelli, reluctantly leaves the cards game.
Never disturb them when they are in the middle of the match.
Ungaretti knows well and has realized that he doesn’t have to inform them about his last record on pinball.
He may disturb everyone, except those four.
When they play you better leave them quite.
The only one who has the privilege to interrupt them is Foscolo.
Since he is used to cook - pies, to be precise – everybody is happy to taste his creations.
They say that as a chef has become even better then as a poet, and you know what I mean.
Foscolo is the latest to join the group, all sitting around Peter, standing with the open newspaper.
"It has to be something important..." he says sitting next to Carducci.
"I was writing..."
"Ugo..." Montale comments. "You're dead... Enough with the poems! Nobody reads them anymore, apart from us..."
"Life is short and art is long…" He replies with inspiration, provoking the jeers of his colleagues.
"Listen," Peter exclaims, regaining their attention. "I have to give you some news and I don’t think you'll be pleased. They regard Italy. The school, in particular..."
"What happened, this time?" Ungaretti asks.
"They decided that poems are immoral for students?"
"No", the saint responds. "Something different…"
"Explain…" Quasimodo says, still annoyed for having left the good cards in his hand.
"Well…" Peter starts, slightly embarrassed.
"On the next school year, the Berlusconi government will distribute 70,000 copies of a CD. It contains some of your most famous poems…"
"Are you serious?" Carducci exclaims. "It’s a great idea! Why did you say that we would not have been pleased by the news?"
"Good," Saba says too, "an invitation to reading is always a good thing. Especially in a country of illiterates like ours..."
"You’re right" Peter admits and tries to better explain. "The fact is that the poems are not meant to be read, but listen..."
"Okay," Cardarelli says. "If the poems are declaimed by a good actor, the rhymes obtain power. Who are the interpreters? Vittorio Gassman? Marcello Mastroianni?"
"They're dead..." Peter reminds him. "However, the poems on the CD are not recited…"
The group remains perplexed.
"Your poems are sung..." the saint reveals them.
"Sung?" Ungaretti asks very confused, as well as others. "And who are the singers? Mina? Mina is alive, no?"
"Yes, she is, but not Mina…" Peter answers.
So, reading the newspaper, he informs the poets: "I tell you right now the interpreters. Giosuè, your famous words are sung by Danilo Brugia and Idaelena..."
"Who the hell are they?" Carducci asks agitated.
"The first is a soap opera actor…" Peter answers, while Giosuè begins to cry.
The best words to describe what happens after are inevitably two: depression and anger.
When all poets know that their extraordinary poems will be sung by TV serial actors and reality shows contenders, they start to scream and become violent.
But above all, when all come to know that the poems will have the music by Loriana Lana, the famous lyricist of Berlusconi, Peter is forced to flee from the room and shut them inside.
Nobody knows if he will be able to stop them.
Someone, here, should start to worry… 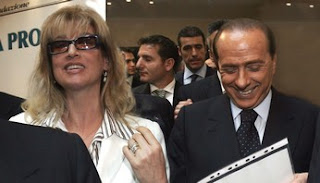 The News: The poems will be sung at school.
Stories and news: “invented” Stories, fruit of my imagination, inspired by “true” media News.
The people and the tragic story of Italy, Saturday March 20 2010, World storytelling day in Rome.
Share the post: