February 26, 2010
Stories and News No. 118
The Story:
We are in hell and it’s obviously hot.
Not as burning as it should and Satan complains to his mysterious advisor...
"Have you lifted the boiler as I told you?"
"Sure, your wickedness! It’s on the maximum level…"
"It’s all because of that bad pollution…" the devil says angry, sitting at his desk and opening the register.
"What?" the man exclaims, standing next to him. "You should be happy! If humanity doesn’t respect nature is another sign of your victory..."
"Victory? What victory?! We are finishing the oil, stupid! And when it will happen, what will we put in the boiler?"
The advisor approached the huge Satan’s ear and whispers: "Well, we could do as those above do..."
"Are you serious?! Are you talking about alternative energy? Wind, solar, that stuff?"
The man eloquently nods.
"Never," Satan says. "I prefer to burn you..."
An undoubtedly diabolical laughter follows his words, which freezes the advisor’s blood.
"Enough with the chatter ", the king of hell says, "let’s see the first guest of this morning."
A little man in dark suit, with glasses and smart look comes forward. 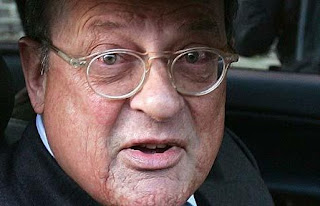 "What’s your name?" Satan asks, keeping his eyes on the register, ready to find matches.
"I’m David Mills", he replies, showing great confidence in his voice.
Then he winks at the adviser, who remains impassive, unseen by the devil.
"Oh…" Satan says reading the notes on him, "You’re a lawyer. My favourite..."
"I am pleased, sir," Mills says seraphic.
"Sir?!" Satan asks. "What does that mean?"
"It’s English..." the little man explains. "Like mister, lord… it’s a gentle way to call someone..."
"Well," the demon rebukes him with cold eyes. "Here you don’t need to be gentle. No puns, here, lawyer…"
Mills tries to intercept the look of the advisor, who carefully avoids him, and that greatly disturbs him.
"Then," Satan says reading the register. "We have good stuff about you: judicial bribery and perjury. Good, very good..."
"Well," Mills interrupts, "I think there is a mistake. I should not be here. Actually I was acquitted..."
"Acquitted?" The devil is astonished and amused at the same time. "What do you mean?"
"Acquitted... I have not been convicted."
"I don’t care" Satan says, smiling feral. "As I said, in my book it’s written that you are guilty of bribery and perjury. Do you confirm?"
Mills tries once again to meet the eyes of the advisor, without luck.
"But my crimes were prescribed..." the little man says, no longer as quiet as when he entered.
"Prescribed?" Satan enquires, widening his eyes with great curiosity. "I missed that. What do you mean by prescribed? Be clear, because we are not in a court..."
"Prescribed..." Mills repeats very nervous. "It means that the lawsuits must be started within a legally determined period."
"I told you to speak clearly, advocate,” the devil warns him sternly. "Explain in simple terms..."
"It means that after a certain time, regardless whether a defendant is guilty or not, he can no longer be prosecuted."
Satan bursts out laughing and the advisor does the same, ever not looking in Mills’ eyes, inevitably more agitated.
"David..." the lord of hell says, barely stifling to laugh, "Take a look around. Do you see judges, a jury and things like that, here?"
"No..."
"In fact, and you won’t see. If someone comes here, it's because he’s guilty. Here just the facts count, not words. And the fact is that even before me you try to be clever, makes you deserve a special treatment..."
Then Satan claps his hands and two huge devils raise Mills and escort him out.
While the cries of the unfortunate man are lost in the corridors of hell, Satan turns to his counsellor and asks: "Who's next?"
"M-Mister B." the advisors answers, with sweat on forehead, suddenly nervous.
"Wow, him!"
Then, noticing the apprehension of the man, he invites him to calm down: "Relax," Satan says, putting his disturbing hand on his shoulder. "You don’t have to worry anymore, as I told you. That man cannot promise anything, here. You're no longer his slave. Now you're mine…"
The News: David Mills bribery case thrown out of Italian court on technicality.
Stories and news: “invented” Stories, fruit of my imagination, inspired by “true” media News.
The people and the tragic story of Italy, Saturday March 20 2010, World storytelling day in Rome.
Share the post: