Alfano and CSM bloody beat and Napolitano calls for calm

March 18, 2010
Stories and News No. 132
While in Trani the investigations into the hot tapping of phone calls between Silvio Berlusconi, Agcom and now also the Rai director Mauro Masi are continuing, the clash between the Justice Minister Angelino Alfano and the CSM (Superior Council of Magistracy) - in the person of President Nicola Mancino - is hot.
In any case, President Giorgio Napolitano calls for calm…
The Story:
At home is a turbulent time.
Mom and Dad are out for work and have left their children Nicola, Silvio and Angelino with their grandfather Giorgio.
He is a very old man but he always seems to know how to handle the more complicated situations.
Nicola is six years old and he is the youngest of the three.
He likes collecting picture cards.
In particular in recent times he has been dedicated to an album on television broadcasts. The rarest are those of politics Talk shows, like Porta a Porta, Report, Ballarò and especially Annozero.
He waited six months to get the card of it.
Silvio, a year older, has no particular interest.
The only thing that matters to him is to have more toys than the others and he is succeeding, although Nicola suspects that some of them have dirty origins.
Angelino, eight years old, is the oldest.
He’s not so smart.
Silvio, making promises to him and never keeping them, always brings him to his side.
This time the problems for Giorgio are very hard to solve.
In fact, since only an hour that the parents are out, he hears strong noises in the bedroom of his grandchildren.
However, he slowly gets up from the couch, as fast as a crippled snail and after a quick quarter-hour he rides through the corridor, to appear in the doorway of the room.
In short he knows the facts, of course combining the different versions.
Apparently, Nicola, who doesn’t find the stickers on the politics talk shows, says he has evidence that Silvio stoles them.
Nicola considers him accountable because he claims to have heard him saying several times not to endure those kind of picture cards, particularly that of Annozero.
“Is it a fault if I do not like a sticker? Silvio exclaims with an innocent look, making Nicola more upset.
Angelino watches the scene in silence, but his location next to Silvio unequivocally indicates which side hangs.
The three await the opinion of their grandfather, who in a tone remarkably relaxed, bordering on the soporific, says: “Stay calm.”
Then he returns to doze in the armchair in the lounge.
After the long journey to the goal, he has just begun to snore while other bustles come to his ears, even more violent than before.
Same journey and this time the scene shows that the tension is increasing.
In fact, stopping only at the sight of his grandfather, Angelino is trying to steal the backpack with evidences to Nicola, who vigorously defends it, while Silvio observes all smiling.
The grandfather asks for explanations and knows that Silvio has asked Angelino to verify the evidences against him in possession of Nicola.
He says it is his right to inspect them, to control if they have improperly been obtained.
Nicola, who takes the opportunity to snatch his bag from the hands of Angelino, protested: "Excuse me, grandpa! I have evidences that someone has robbed me and I have to give them to him?"
"Not to me," Silvio promptly corrects, continuing to mock. "To Angelino…"
"It's the same thing!" Nicola shouts.
The grandchildren are still awaiting Giorgio’s opinion.
The old man, after a brief hesitation about ten minutes, gives his point of view: "Silvio and Angelino, Nicola has the right to prove who is guilty of picture cards’ theft. Nicola, Silvio and Angelino have the right to check that you have properly found the evidences."
The three remain all with a confused expression, while the grandfather goes away again.
He is not even arrived to the chair that a crescendo of screams and noise bursts in the bedroom.
Grandpa makes a true record and in less than ten minutes retraces his steps.
What he sees is a real battle, like rugby, where the oval ball is the precious backpack with the evidences.
This time the grandchildren notice him but keep going to beat.
"You have basically to respect the autonomy of all..." exclaims Giorgio when his feeble voice is lost in the confusion of the barrel.
"In this period of tension and conflicts we to avoid dramatizations, that always misleads..."
Thos are wise and balanced words.
And the fight continues. 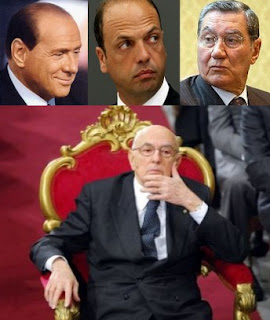 The News: It’s a clash between Justice Minister Alfano and the CSM.
Stories and news: “invented” Stories, fruit of my imagination, inspired by “true” media News.
The people and the tragic story of Italy, Saturday March 20 2010, World storytelling day in Rome.
Share the post: