Berlusconi: I am a nightmare on TV and in the toilet

March 24, 2010
Stories and News No. 136
Silvio Berlusconi, thanks to his personal idea of equality, now appears everywhere on TV. Despite numerous controversies after his recent speech in Rai, the prime minister made a live phone call to Mediaset Tg5 to make this frightening statement: "The Left, for 16 years to now, has only one big nightmare and great adhesive: this nightmare is called Silvio Berlusconi… I try to be this nightmare…"
The Story:
The troubling fact that I'm about to tell happened to Esterina Moreschi.
She is a genuine person, honest, with a deep-rooted aversion to politically correct euphemisms and adjectives.
For example, when someone defines her not so young, she protests, asking to be called simply old.
“I feel old and I am too”, she ever says, “inside and out.”
Esterina early retires for health reasons, as she suffers from acute narcolepsy.
However, his real health problem is due to a serious trouble, how can I say, to free his body.
In my place, she would say that for her it’s hard to shit.
You know her, she likes to speak clear.
Like all those TV viewers, she is following Italian political skirmishes that are accompanying us to regional elections on this weekend.
Esterina doesn’t have a precise orientation.
Many times ago she was a Christian Democrat.
After all the accusations rained down on that party and especially to his leader Andreotti, she has gradually moved into the limbo of citizens who doesn’t go anymore to vote.
Like many Italians, she sees politics as something far away, that is up there to take care of us and comes down just on TV screen.
That TV has become her best friend.
That’s typical.
However, contrary to popular belief that sees the elderly ladies set with soap opera, Esterina is passionate with action films, especially those where there are beatings and punches.
She loves to watch people beating and since this happens even live on several talk shows, she also follows these ones waiting for the fight.
For this reason she didn’t like the recent stop to political programs for the next elections.
For the same motive, if before she was indifferent to him, now she has developed a growing aversion to Berlusconi, indicated by the most as responsible for turning off all politics broadcasts.
Now while these talk shows have been transferred on the web and streets, Silvio Berlusconi goes everywhere, in all networks with his speeches.
So when Esterina, listening Mediaset Tg5, has heard again another live phone call by Silvio had a real nervous breakdown.
Try to understand her.
When someone particularly irritates you, if he would emerge in each point you look… well, that increases your repulsion.
Nevertheless, that repulsion has made the miracle.
Esterina, becoming very angry, has turned off the TV and has gone to the bathroom to finally make that big one.
She has pulled down her skirt with extreme confidence and has sat on the toilet convinced to be able to get rid once and for all.
She was about to succeed when a distinctive voice has broke the liturgy of that wonderful romance between her and her suffering behind.
No…
Him?
Even here?!
The old woman looked horrified at the bottom of the bowl and has seen the smiling face of Silvio, asking her vote against the prosecutors and the justicialist Left.
Well, it’s hard to believe but a few seconds after Esterina made the biggest shit of her life! 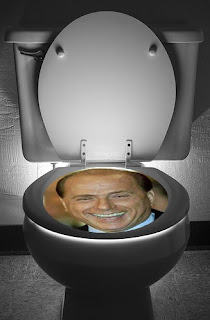 The News: Berlusconi says he is the nightmare of the Left.
Stories and news: “invented” Stories, fruit of my imagination, inspired by “true” media News.
Stories and News, The Storytelling show, Saturday March 27 2010, in Ferrara.
Share the post: