March 15, 2010
Stories and News No. 129
The Story:
Here is another scandal regarding Silvio Berlusconi.
The Prosecutor of Trani are examining 18 phone calls - 13 in conversation with the component AGCOM Giancarlo Innocenzi and 5 with the director of Tg1 Augusto Minzolini - in which the Italian Prime Minister would ask to close political talk shows as Annozero and others.
I am strongly interested in what a PdL voter thinks about this latest disturbing news on his leader:
Blog: Hello, do I speak with a voter of Berlusconi?
Elector: Berlusconi… of PDL.
Blog: Anyways, it’s the same.
Elector: No, not the same. I vote the party, not just Berlusconi...
Blog: What is it? Are you moving away from him?
Elector: No away. I am and I remain a supporter of our president.
Blog: Well, what do you think of these interceptions?
Elector: All garbage.
Blog: In what sense?
Elector: You understand. These interceptions are just rubbish pulled out now that elections are coming. What timing, huh?
Blog: So are you saying that they are all false? Are they a mere result of a conspiracy?
Elector: I never said that. Don’t put your words in my mouth.
Blog: Excuse me, have you read the interceptions?
Elector: I don’t loose my time with this nonsense.
Blog: If you are interested, it seems that Berlusconi asked to close Annozero and other talk shows on current affairs and politics. What is actually happened…
Elector: And what does that mean? Berlusconi is the owner of Italian TV?
Blog: Well, practically, between Mediaset and Rai this is it...
Elector: Here's the usual propaganda. If it were really as you say, there wouldn’t have been for so many years on the air broadcasts as Annozero, Ballarò and Report, which do nothing but throw mud on the government. With the money of taxpayers...
Blog: It could be as you say, but do you think is it correct that the prime minister has the right to close them?
Elector: Listen, do you want to know my opinion? If he did so, he has done well. Santoro is a partisan and he is there only to attack Berlusconi. Like that Marco Travaglio. Television must be of all and for all.
Blog: Like Bruno Vespa shows?
Elector: Sure. And then they closed his program Porta a Porta too, now that I think. So I do not understand where the conspiracy against Santoro is...
Blog: Some people think that the target was still Annozero. They shot the pile to hit Santoro. In the interceptions Berlusconi also speaks of his program…
Elector: Do you want the truth? On Saturday the centre-left has done a demonstration and once again the only thing that unites them is Silvio Berlusconi. They should thank him because he is the only thing that holds them together! What will they do when Berlusconi will be no more here?
Blog: I don’t know if what you say is true, I hope not, but this is a good question. It might be appropriate to start thinking about… 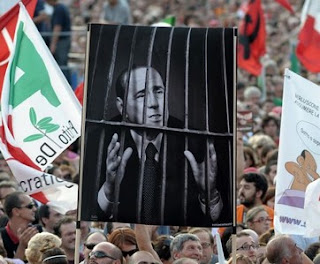 The News: Berlusconi, 18 phone calls in the acts of the Prosecution.
Stories and news: “invented” Stories, fruit of my imagination, inspired by “true” media News.
The people and the tragic story of Italy, Saturday March 20 2010, World storytelling day in Rome.
Share the post: