Berlusconi Promoters on the streets for freedom: crazy people?

March 17, 2010
Stories and News No. 131
The Story:
Life is strange.
When the truth comes knocking at your door, the surprise of seeing it there on the threshold in flesh and bones can be truly shocking, but when you realize that it had already entered since a long time and it was everywhere, in every drawer, in every picture, under the pillow, almost everywhere your eye would be able to get, you are in immediate danger of losing your mind.
However, People were not crazy.
They lived in a country where their mother, Parliament, was flirting with Government, the murderer of her husband, Constitution, People’s father.
But People were not crazy.
They stayed in a country where the most valuable allies of the government cried out for the fragmentation of the State and at the same time, they were champions against the invasion of foreigners.
Yet, People were not crazy.
They lived in a land where those who called themselves the bitterest enemies of Government, were the first on time to help him in time of need.
Nevertheless, People were not crazy.
They lived in a nation where everything was upside down.
The spectators were the gifts of television to its investors, the readers were the goods sold by the newspapers to their donors, the believers were the victim sacrificed by the clergy to live with their lack of faith, the soccer fans were the jewels to decorate the wives of footballers, the cinema audience were the butt to entertain idiots masquerading as actors, well, thus the voters were just a sea of crosses in the right place at the right time to allow the show called democracy to go on.
However, People were not crazy.
Maybe they were, they thought.
In that case they would have one answer for all questions.
Everyone would have got a reason to explain the reality with a single word.
How do they watch that stuff on TV? The spectators are all imbalances.
How can they give credit to a news item written by someone who has so little free speech? Readers of newspapers are a bunch of lunatics.
How can they call themselves Christians and at the same time take as gospel what comes from that gigantic manifestation of power? The believers are a mass of fools.
How do they accept that a guy who kicks a ball might live as god on earth? The fans are really out of mind.
How can they go every Christmas to watch those pictures of shit, made by shit actors and directed by shit filmmakers? The public is just mad.
How can they still believe that those persons, once they got your vote, will keep their promises? The voters are all, without exception, foolish.
No, People were not crazy.
But the night they wanted to sleep like everyone else.
They wanted what all had… a big house, a car, a mobile phone and a pay TV.
Especially they didn’t want to feel alone.
There was only one way to keep all: leaving things as before.
People were not crazy, but could learn to be…
Text from the storytelling spectacle of 20 March in Rome: The people and the tragic history of Italy (World Storytelling day 2010). 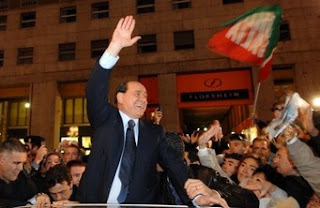 The News: Berlusconi: "I want 500 thousand people in the streets."
Stories and news: “invented” Stories, fruit of my imagination, inspired by “true” media News.
Share the post: