Formigoni PdL out because of invalid signatures

March 02, 2010
Stories and News No. 120
The Story:
The Court of Appeal of Milan decided not to admit to the regional elections Formigoni List of Lombardy, invalidating more than 500 signatures.
According to prosecutors, following the request of the Radicals, 514 of presented signatures on 3953 are not regular. It remains 3421, a number that is lower than the minimum required by law: 3,500.
This morning Formigoni woke up very early.
Being honest, he has not slept at all.
The only time when he has fallen asleep he had a nightmare in which a naked Brunetta tried to seduce him, if you know what I mean.
However, Formigoni decided not to remain still and want to respond with authority.
His collaborators have finally the list of invalidated signatures and Formigoni want to see clear.
In the meeting room of the Election Committee his most trusted co-workers are waiting in silence.
One of them holds a document.
It undoubtedly is the list of the rejected signatures.
Formigoni immediately saw it and without seating takes it by the hand of the man and begins to read, choosing one at random: "Obi-Wan Kenobi… Didn’t you remember my orders?! I said no immigrants! This one definitely will not have the citizenship…"
"No, President…" the guy, obviously raffled as a spokesman, tries to intervene, "Not really…"
"Shut up!" Formigoni screams vehemently. He decided to respond forcefully and the first rule is to whip the servants, as Berlusconi advised. "And they say we are the racists... Anyway, here's another: Paul VI… No! Don’t tell me that…"
"Yes, President…" the unfortunate person who has the burden of representing the assembly says.
"You’re idiots! Don’t tell me that you wrote the last name Sixth in Roman numerals…?"
"No, he really is the Pop…"
"Shut up, I said! Illiterate! But now let's see… I want to read another: Dr. Watson?!"
"Well, in fact…" the chosen scapegoat tries to explain.
"How is it possible?" Formigoni cries, "How can you forget the name?! A medic, then, a doctor who has given us his support! Do you forget how important health is in our region?"
The other one, the only employee who remained standing, is speechless and assumes an expression of resignation.
"Look," Formigoni says trying to keep calm, "I just want to read the last one: you-know-who… What does it mean?!"
"Well," the guy who’s responsible to answer says, "that’s the way Lord Voldemort is called…"
"Who?!"
"Lord Voldemort… that is Tom Riddle…"
"This is too much!" Formigoni shouts, at the maximum of anger. "How many times have I told you?"
No one is able to say a word.
"How many times have I said that nicknames are irregular? Write Tom Riddle, is it so difficult?!"
The leader leaves slamming the door, however, the Assembly issued a collective sigh of relief.
After all, the boss was not angry so much.
Who knows? It could have been much worse if he had come to Genghis Khan or Archimedes Pythagorean… 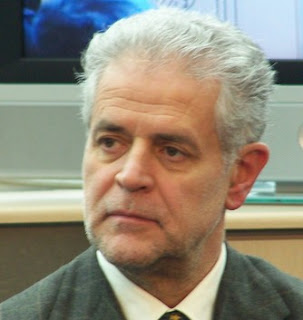 The News: List PdL Formigoni is out of regional Elections.
Stories and news: “invented” Stories, fruit of my imagination, inspired by “true” media News.
The people and the tragic story of Italy, Saturday March 20 2010, World storytelling day in Rome.
Share the post: