March 16, 2010
Stories and News No. 130
The Story:
They are expected in the afternoon in Trani.
They are the inspectors of the Minister of Justice Angelino Alfano.
The city is in turmoil while fear and anxiety prevail everywhere.
Their reputation precedes them and the voices turn around, fomenting the most ancestral terror in the hearts of citizens.
Hide yourself, they are here…
Jack Rottweiler is the oldest.
The mastiff is his surname.
The reason is in the square jaws and the always grumpy nose, but also because he really barks as a dog.
No kidding, Jack has always been a loner.
His only companion is a Rottweiler.
A female, to be precise and some implies that among them there is a relationship.
El Pais newspaper promises hot photos.
We'll see.
What matters is that the leader knows how to be obeyed.
He uses elementary and basic commands.
A long bark when he's hungry.
A short one when he’s thirsty.
Two long barks when he needs the WC.
Three if a big one is coming…
The deputy is Frank Whiskers and has oriental origins.
He has regular citizenship, don’t worry.
Obviously, if he had not been a Minister Alfano inspector, would have found many more problems to get it.
Soccer player Amauri too, but this is not the time for polemics.
It’s 'time for terror and Trani city knows that.
In fact, it seems that Frank is a cannibal, but with specific preferences.
It seems that since he was a child he was fed with court of cassation, court of appeal and all kind of judges.
The Trani prosecutors are trembling and they have good reasons.
The third inspector, not less formidable than the first two, is called Slim the Ball and his name is not accidental.
He has the bald so smooth that the louses skate on it.
There macabre anecdotes on him too.
Many say that the reason for such great flatting is due to his horrendous practice: Slim rubs his head every night with real Communist skin.
And he is quite irritated because his stock is running out…
The last but not least is Johnny Beijing.
He might be considered the least dangerous to a distracted and naive look.
He’s low, almond eyes, gentle attitude, always silent.
What a mistake.
Johnny is really the most terrible of four.
What’s the reason for that?
He knows all about everybody.
Thus, he can do what he wants until he speaks… 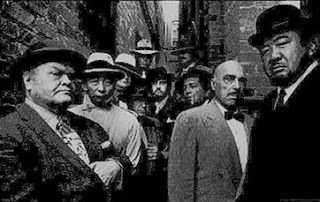 The News: Trani, Minister of Justice Inspectors arrive.
Stories and news: “invented” Stories, fruit of my imagination, inspired by “true” media News.
The people and the tragic story of Italy, Saturday March 20 2010, World storytelling day in Rome.
Share the post: