March 30, 2010
Stories and News No. 140
The farce of regional elections is over and the curtain falls on the democratic elections theatre. However, the show goes on, at least until there is public to attend.
Fans and supporters, detractors and followers, disciples and lovers - after the pseudo leaders of the so-called major Italian parties have made their comments - will get the usual circus, among partisan TV news and more or less heroic talk shows.
The Story:
Once upon a time there was a country of 60 million citizens.
Among them, in March 2010, called to vote people were about 41 million, 68% of the total population, approximately 7 out of 10.
In March 2010 elections, 13 regions were involved.
About 26 million people went to vote, 43% of the whole population, only 4 out of 10.
So 4 out of 10 decided the governments of most regions on the plate.
It follows that the remaining 6, approximately 36 million citizens, did not vote for these governments.
The national average of votes received by the Centre Left corresponded to 47% of voters, one point more than the Centre Right, at 46%.
It means that about 12 million people voted for the Democratic Party and its allies and little less the coalition of the PDL.
12 million on one side and 12 million on the other.
One fifth of the Italian population against the other fifth.
Three out of five, the majority of the country, did not vote for their parties.
This is the reality.
Yet these were the headlines of Italian major newspapers:
Corriere della Sera: "Berlusconi wins, Lega Boom"
La Repubblica: "Bossi drags the Right"
Il Giornale: "Polverini plus Cota, the PDL and Lega triumphed"
La Stampa: "Berlusconi, lesson to PD"
Il Messaggero: "Regional elections, the advance of Centre Right"
Il Tempo: "Love overcomes hate"
Libero: "What delicious"
Long live Italy, long live democracy! 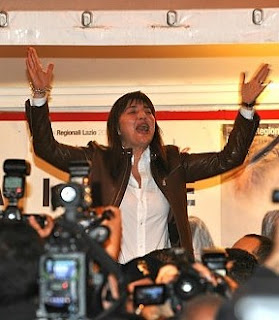 The News: Elections 2010, here are the results.
Stories and news: “invented” Stories, fruit of my imagination, inspired by “true” media News.
Share the post: