March 01, 2010
Stories and News No. 119
The Story:
Following the resonant exclusion of Berlusconi’s People of Freedom from the Rome lists in the next regional elections - delivered late by the delegate person because of a sandwich - the Italian Premier ordered a special session with other party leaders.
After a heated meeting, Silvio communicated to his colleagues that the sandwich is banned by the coalition.
"The sandwich is leftist, it always has been. It’s a reactionary food, only able to criticize, while the Milanese risotto and cotoletta are the symbol of the politics of doing. The sandwich stands there, still. It’s a parasite that lives behind what takes inside!"
"The sandwich is not Italian," Lega Nord leader Roberto Calderoli said, without fear of contradiction, "By our research, we found that the sandwich is Moroccan. And it is also Islamic. The illegal immigrants took it here and have made the macumba to convince us that it’s our stuff."
Tg1, as always impartial, opened all the broadcasts of the day with an editorial of director Augusto Minzolini, which seemed like a real tirade against the sandwich, a plague of our society.
Cardinal Tarcisio Bertone, in line with the journalist, intervened with a warning to the younger generation, urging them to beware of the lure of the sandwich, capable of deceiving their fragile minds with the aromas of a lascivious ham and a seductive scent of mortadella.
Maurizio Gasparri doesn’t know what to say but he still expressed his opinion and strongly criticized the piadina Romagnola, which in his view should not be underestimated.
However Giulio Tremonti has reassured everyone by saying that removing the sandwich by our economy, our situation is always better than other European countries, because we still have the toasts with tuna and artichokes and the pizza margherita.
Bruno Vespa during Porta a Porta has presented a plastic that shows how many germs may get into a sandwich, being cut in half and then at the mercy of atmospheric dust.
Meanwhile, Carlo Giovanardi offered an analysis of the hair of all the Members of the PDL to see who actually eats this unclean food.
Gianfranco Fini said he is not completely agree with the party line and has confessed that in the past he has eaten several sandwiches, still angering Berlusconi.
By the way, Silvio has other reasons to be irritated.
In fact, someone says that La Repubblica will release an interception when it’s possible to hear the Prime Minister eagerly chewing something and the newspaper hints that it is a huge sandwich with salami.
Silvio denies and Minister Angelino Alfano has already prepared a new ad personam law: the Breakfast Lunch Dinner Bill, which will prohibit the interception during eating time.
The protests inevitably get high.
Anyway, all this mess because of a sandwich? 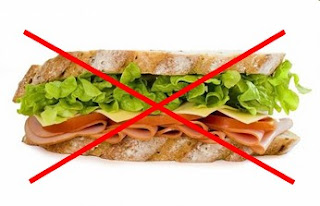