April 30, 2010
Stories and News No. 162
Every day that passes I am convinced that Italy is truly the most paradoxical country in the world.
Quite simply: aid workers are terrorists and warmongers are heroes, who talk about the Mafia maintain its power and who is enriched thanks to it is its bitterest enemy, who dares to dissent is a traitor and who ever changes his mind is a loyal person.
However, these deceptions come almost always from the same source, a kind of virus that distorts the facts and the truth.
The problem is that there is no antivirus in Italy.
Without antivirus, the infected file is not recognized.
The virus is considered a system program.
Indeed, it’s the system…
The Story:
Once upon a time there was once a kingdom called Paradox.
In the kingdom there was a king that we can call Silvio.
The king had a son that we can call Claudio.
Prince Claudio was not exactly what you call a genius and was in an awkward situation.
The tax collectors, having investigated him, discovered that the castle where his daughter lived had been purchased through a large gift of money by the robber Anemone - which means wind flower - so named for its ability to lighten the pockets of the poor in favor of the rich.
He was a sort of Robin Hood in reverse.
Moreover we are in the kingdom called Paradox.
Prince Claudio decided to resign from his title and went to King Silvio to ask for advice.
"Claudio, you have to go forward," the king said, "because if I accepts your resignation, the kingdom would be weaker: we would give a picture of crumbling now that we are under attack from the Baron Fini…"
Baron Fini, called the dissident, in the past was an ally of the king but he dared to criticize him before the whole court and from that day he was subject to terrible insults.
Even his mother-in-law was not spared.
"They fight you to attack me, you know," King Silvio continued, "but you'll see that in a week everything will deflate; you just hold on until the wave passes..."
"What? The oil spill affecting the new world has come down to our shores?"
"Idiot and idiot me I've given such birth. It's a metaphor..."
"Oh..."
However, despite the reassurances, Claudio was disheartened: "I don’t want to participate in a process in the public square, they disgrace me and my family..."
"Don’t tell this to me..." the king thinks.
"You have to defend yourself more hardly," Silvio added, raising his voice, "with a knife between your teeth! You have to show fierce, fearless. Only then you will get out..."
The same night Claudio had a restless sleep, remembering the words of his father.
There was no other way than following his advice.
The next day he came to court with a knife between his teeth, trying to look fierce and fearless in the face.
While all the courtiers watched him admired behind him baron Fini came, and, giving him a friendly but firm pat on the back, greeted him: "Claudio, how are you?"
The prince was caught by surprise and unfortunately swallowed the knife, dying instantly.
Thus the kingdom called paradox had its moral: Claudio at his funeral was celebrated as a hero who died in the performance of his duties, baron Fini was tipped as a murderess and a traitor who attacked from behind and the king lost an idiot son but got another castle… 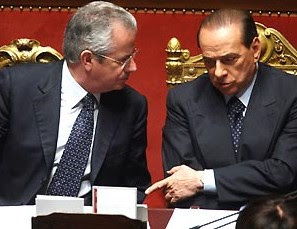 The News: Defend yourself with a knife between your teeth.
Stories and news: “invented” Stories, fruit of my imagination, inspired by “true” media News.
Share the post: