Fini and Berlusconi, a history of sex

April 23, 2010
Stories and News No. 157
Now we have arrived to the psychodrama.
Or the Neapolitan sceneggiata, it depends on your point of view.
Gianfranco Fini and Silvio Berlusconi, the two main leaders of the PdL, clashed yesterday before the cameras as it had never happened before.
The two are now as a separated couple into the house.
I am particularly interested in the psychological components of this dispute and I asked the opinion of the famous Italian-American psychotherapist and sexologist Lisa Pointgee.
The Story:
A: Dr. Pointgee, first of all thank you to do me the honor of being my guest today.
L: You’re welcome.
A: Let’s go now to the theme of this interview. I know that you - being of Italian origin, always follows our facts.
L: Yes, indeed.
A: Have you heard about the clash between Prime Minister Silvio Berlusconi and President of the Chamber of Deputies Gianfranco Fini?
L: Sure. I have not lost anything of yesterday public meeting.
A: Really?
L: I even recorded it all, saving it as useful material for my lectures.
A: Why?
L: Believe me. I've never seen an externalized sexual nature conflict made with such energy and passion.
A: Sexual nature...?
L: Of course. The dynamic between Fini and Berlusconi is clearly erotic, that’s obvious.
A: Can you explain why?
L: Yes. You see, if you carefully observe the words and especially the expressions, gestures and non-verbal of the two, you will notice all the classic elements of a quarrel between lovers. In this case, we have a classical rebellion of a subdued subject (Fini) to the dominant one (Berlusconi).
A: Are you saying that between the two there is a sadomasochistic relationship?!
L: I did not say this, don’t label it. Usually marital relationships are also based on power relationships and the balance may vary over time and completely reverse its symmetry.
A: So does Fini want to overturn the symmetry?
L: We can put it that way. Or that he no longer accepts the role of submissive. It obviously undermines the dominant player, as the others.
A: The others…?
L: Of course, the other submissive subjects. Often a dominant personality, with a particular power, attracts many submissive people around him. It’s logic that if one of them rebels and wants to reverse the balance, others attack him and stand in defence of their master.
A: It sounds like what it’s happening…
L: That’s similar to what may happen in a harem with more wives and one decides to challenge the husband authority. The other women wouldn’t like it, because the liberation of rebel would be evidence of their enslavement.
A: I see. How do you think this crisis will evolve?
L: Continuing with the harem metaphor, insurgent woman have to leave her husband. Otherwise, she would seem really inconsistent… 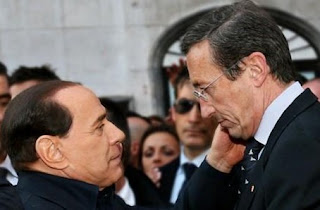 The News: Berlusconi and Fini live as a separated couple in the same house.
Stories and news: “invented” Stories, fruit of my imagination, inspired by “true” media News.
Share the post: