He is with Berlusconi She with Fini: couple divorce

April 16, 2010
Stories and News No. 152
The presumed - until official confirmation arrives - dispute between Prime Minister Berlusconi and President of the Chamber Gianfranco Fini, the main founders of the People of Freedom, is on the front pages of every newspaper.
It’s not the first and certainly not the last one.
The divisions are a feature of our politics, since I can remember.
Someone said that it’s the conflict that gives true meaning to a story.
If there isn’t conflict, we have no story, no narrative, there is no tale to follow and the show has no reason to go on air.
In this way the share dangerously falls, as well as advertising earnings.
You know, without money, almost everybody refuse to engage.
The confrontation, the controversy, the clash between the stars of parliament as those on reality shows or exclusively spoken sport TV channels, are essential to keep viewers glued to the screen.
That’s absolutely necessary; otherwise they might do something else.
As going out…
The Story:
Bianchi’s are a typical loyal to the People of Freedom family.
Carlo works for Berlusconi’s Mediolanum Bank.
He has always voted for Silvio, even before working for him, let alone later, when he joined the great team of the Italian premier.
His wife Maria is a lawyer, has a well busy office and is a daughter of art.
That’s logic: otherwise how could she have an office, well busy too?
She has ever been a convinced supporter of Gianfranco Fini but never entirely accept his decision to merge his party with Silvio’s one.
So, now that the most serious rift between the two leaders is open, the couple breaks.
It’s late evening, some hours after the restless lunch the two founders of the PDL had.
Carlo enters like mandrill in the bedroom: "Dear Maria..." he says coming near to her, brandishing the usual smile.
His wife, locked in her dressing gown, is standing in the room and freezes him with the following enigmatic words: "I announce that I am going to form an independent group."
It’s definitely one of the most original ways of history to end a relationship with the marital partner.
"Why, Maria? Wait..." the distressed husband replies, once understood the message of his wife. "Let’s spend the weekend... a pause for reflection to find a common solution..."
Actually this is not the first crisis between them, but every time Carlo has been able to patch.
This time it seems not working.
Maria begins to list all the problems which she have long denounced, first of all, the lightness shown recently by Carlo in making gifts to his not more secret lover, a prostitute, who’s supporter of Lega Nord party.
The latter, an insatiable nymphomaniac, has even declared that intends to fuck the whole bank of Carlo…
Maria has many things to say, literally opening the classic Pandora's box: "Not to mention your mother - the mother-in-law is a adorer to Berlusconi - that every day even accused me of being a traitor, if only I dare to ask to see another TV news than Rai Tg1 or Mediaset Tg4! Listen, I don’t want to waste my family and let and you and your whore to decide our lives. You made me outcast. I am not consulted on important decisions, you made me lose weight…"
"But if you fatten..."
"It's a metaphor, idiot! Look, if the only way to get things is to do like her, I’m ready…"
"Do you want become a whore?!"
"No, stupid! I mean that even those like me are able to masquerade in wolves!"
Carlo shows a very straight face, wondering how his wife could know the ultimate erotic game he played with his other lover.
However, he doesn’t give up and tries to calm the waters: "Dear Maria, don’t do this… the last year we got a lot of money… we had a huge hit... our family will travel faster and you... you're our engine!"
This statement sounds like another joke for Maria, since a few days earlier she found her husband at a dinner with the fiery lover and even her son - a fish-eye boy that many call the Trout. Once Maria saw his face has felt a bit better, knowing she’s not his mother.
"We cannot go ahead," Maria said with icy eyes.
However, Carlo has obtained a truce for 48 hours.
Nevertheless, the last words exchanged between the two before falling asleep were a whole program: "We had no quarrel," he murmured her by turning off the light, "it takes two to do it..."
"Yes..." Maria replied before going to sleep. "But divorce needs just one…" 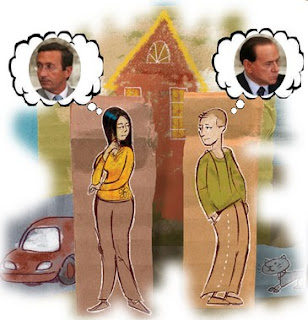