I support Emergency and what about Minister Frattini?

April 13, 2010
Stories and News No. 149
While three of our fellow citizens are still prisoners of a foreign government, the statements of our - as meaning paid by all of us - Foreign Affairs Minister Franco Frattini remain in chronological order the following:
April 11, 2010, after the confession hoax released by the Times: "I pray that is not true, it would be a shame for the Italy. There are facts… very dangerous weapons were found in a hospital by Emergency. We all want to know the truth and we want to know it as soon as possible."
Yesterday, about 5 p.m.: "I see rage, grief and sincere astonishment in the three Italians vicissitude. But we have not abandoned them: their presumption of innocence, along with our commitment made by the Afghan authorities to respect their rights, still apply. They are Italian citizens, our compatriots, who chose the medical vocation to serve those who suffer. No difference or distance can divide us by this commitment and this affiliation. We follow and we’ll follow with care and attention the situation."
Last night on Italian TV: "The government is working because the truth prevails… there is no evidence that the three have confessed. I hope that the three compatriots leave free from all accusations of involvement."
As if to say, Franco Frattini… a man all in one piece, a firm guarantee of security and authority for our country in the world.
I support Emergency, but what about you, minister?
The Story:
My name is Franco Frattini, I am Minister of Foreign Affairs if Italian Republic from May 8 2008 and I'm part of the government led by Silvio Berlusconi…
I am one of those politicians who, when time came, are overflowed in Berlusconi’s Forza Italia…
In July 2004 a law on conflict of interest that has my name was approved, which, according to the Parliamentary Assembly of the Council of Europe, should punish the conflict but essentially not prevent it…
In 2007 I was harshly criticized by members of EU Parliament for the following statements on freedom of movement within the EU: “…what to do is simple: you go to a nomad camp in Rome… and ask to people "what you live of?". If one answers "I do not know", you take him and bring in Romania. So the European Directive works: simple, no escape…” Commenting on the striking proposal by Calderoli to place the crucifix in the Italian flag I said: “It’s an absolutely normal proposal…”
In an interview of May 2009 by Corriere della Sera I said: “International organizations must always be respected, even when they are wrong...”
What? Emergency is an international organization? Come on, don’t be demagogue.
In 2008, while the foreign ministers of the world met to address the crisis between Russia and Georgia in Ossetia I was on holiday in the Maldives…
So, what questions are these?
Who do you think I support?! 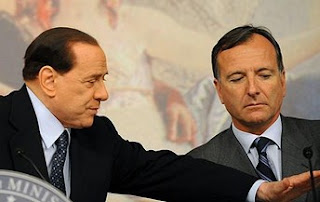 The News: I support Emergency.
Stories and news: “invented” Stories, fruit of my imagination, inspired by “true” media News.
Share the post: